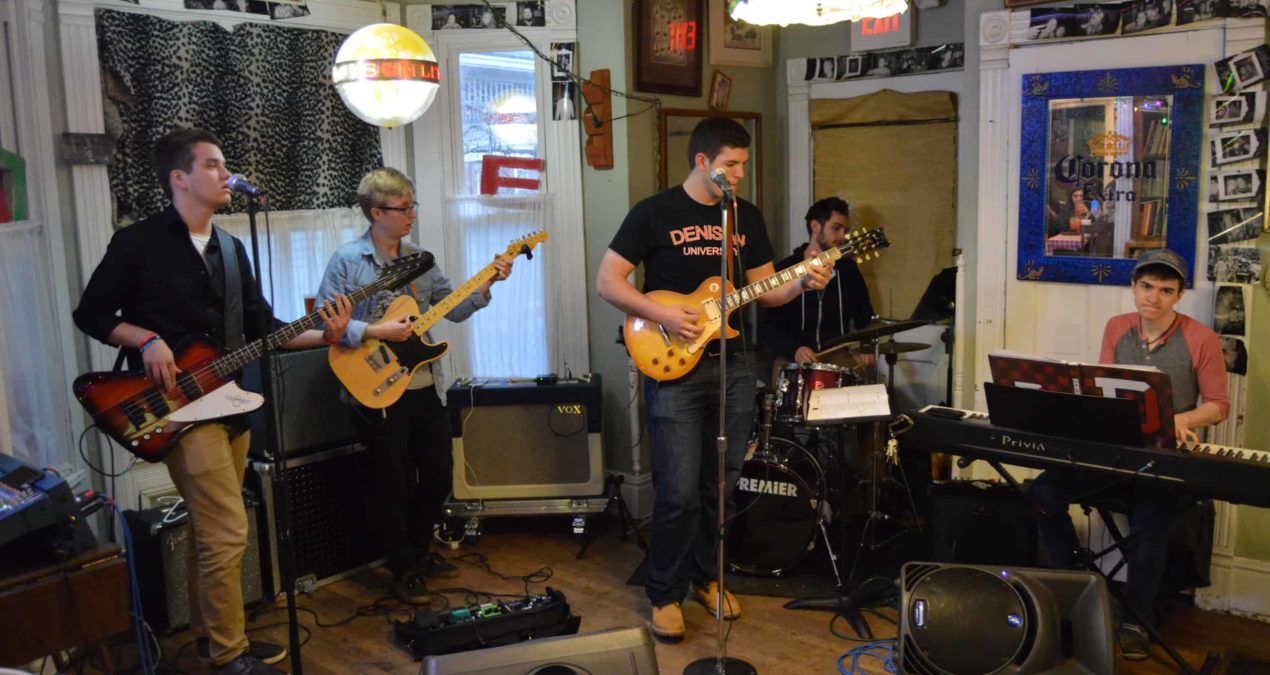 The brave souls that faced the rain and arduous walk back up the hill last Wednesday night found themselves amongst funky vibes and funky dudes.

Easy, Mac, a Denison ensemble organized through the music department, brought their talents to a makeshift performance space in Denison’s favorite space of depravity, Taco Dan’s. The band consists of Jon “Sully” Sullivan ‘16, Mac Sellars ‘16, Benson Anderson ‘18, Sam Rice ‘19 and Oliver Deak ‘17. The five men have been playing together since fall of last semester. Sullivan gathered the rest of the members together and convinced them all to join.

Walking through the screen porch, concert attendees were greeted with retro tunes blaring from the stereo before the band took the stage. Sullivan introduced the band briefly to a decently sized audience before they started playing. If the attendees weren’t enticed by Easy, Mac alone, the promise of happy hour prices definitely got them down the hill.

Immediately, their sound reminded me of a modern Stevie Ray Vaughan. Rice’s guitar playing in the first song was impressive yet effortless, and this trend continued throughout their whole performance. Sullivan shredded the guitar just as well. Sellars’ drumming was controlled and clean, but by no means boring.

Their vocals and instruments carried through the bar despite Taco Dan’s not being anywhere comparable to Swasey or similar venue.

After performing a slower number, Benson’s rendition of “Play that Funky Music” brought the crowd to their feet. It was half-expected that one of the ceiling fixtures to fall to the floor with the vibrations from the bass. The most impressive part was how he didn’t miss a beat even when his mic slid down to about half his height.

Their whole set, though mostly within the same blues/funk genre, had a decent amount of variety. Sellars, the drummer for Easy, Mac, commented on how the group selects their music when he said, “We basically play whatever blues tunes people bring in, although Sully is mostly in charge of finding the music.”

Speaking more on their musical influences, Sellars continued. “I think we all bring our own various flavors to the music. For me, I’ve been listening to a lot of Neo-Soul and Hip-Hop drummers lately, which I try to apply to the songs.”

Easy, Mac’s performance was another reminder to how many incredibly talented peers we have at Denison. Ava McNicholas ‘16 summed up her experience with four simple yet accurate words, “Easy, Mac has soul.”