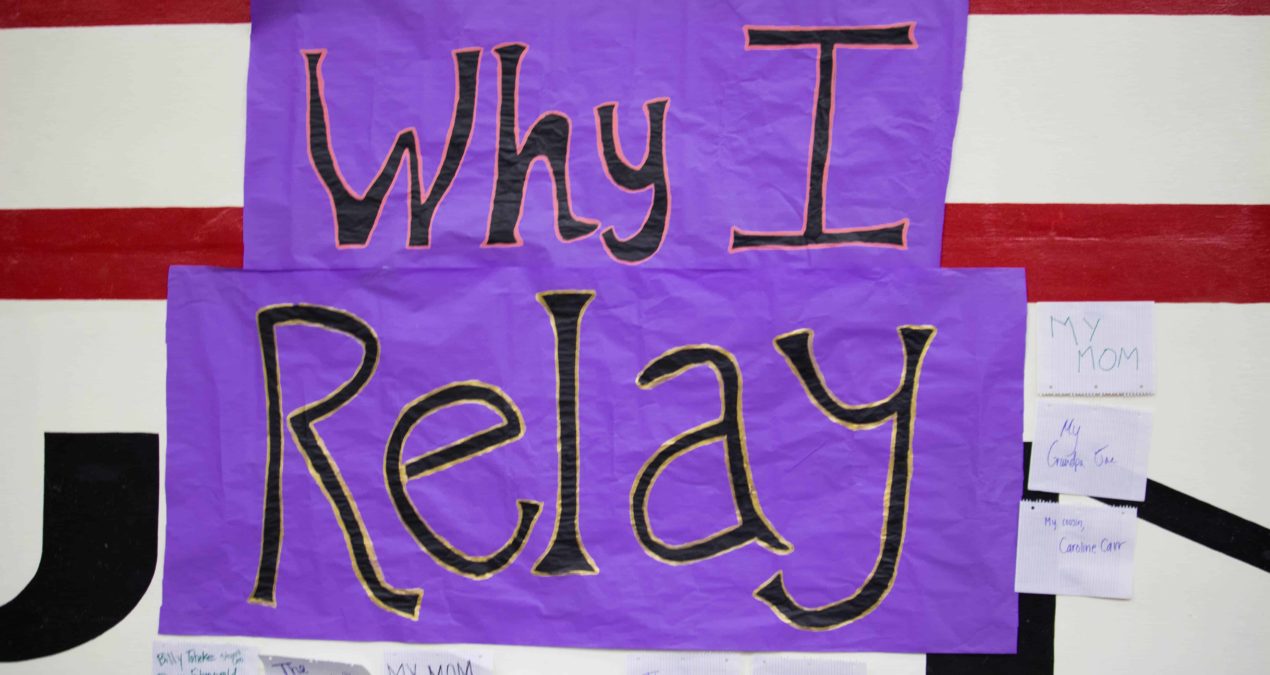 Relay for Life raises over $29,000 for cancer research

Hundreds of individuals cheered and clapped as a myriad of purple and white balloons rained down on the cancer survivors powering through the opening lap of the 2015 Relay For Life.

The event was held at the Mitchell Athletic Center, beginning at 6 p.m. on Friday and ending at 2 a.m. on Saturday. Participants raised over $29,000 for the American Cancer Society, as compared to the $21,000+ raised at last year’s event.

“The committee has worked since the beginning of the year to advertise our event to campus, fundraise, form teams, bring large scale and small scale entertainment and a variety of other behind the scenes logistics,” Sara Lyons ‘18 said. Aaron Carter was one of the many performers at Relay for Life last weekend.

President Adam Weinberg gave the opening speech at the event. “Relay For Life provides a way for students to come together to have fun while also doing something for the larger community,” Weinberg said. “It represents many of the attributes that I admire about our students and the college.”

Signs posted around the facility asked participants “Why do you relay?” During the luminaria ceremony, which was held later that night, this same question was answered. Individuals were asked to crack a glow stick if they were a cancer survivor or battling cancer, and then to put it in a paper bag, and then to put the glow stick in the bag if they knew a loved one whose life had been touched by cancer.

“It was a beautiful way to honor the people who have battled, and are battling, cancer,” Lyons said.

Matt Hughes, a cancer survivor, spoke during the luminaria ceremony.

Jeff Kautz ‘17 said, “You could hear a pin drop as the speaker shed enormous insight on what it means to suffer through the horrible disease, and showed all of us why we were there.”

The Relay For Life committee put together an evening of entertainment for the participants to enjoy while they walked around the track or raised money at their teams’ booths.

Denison Dazzlers, Ladies’ Night Out, DUWop, the dance team, Sketch’rs and the Taekwondo club performed throughout the night. The gospel choir also sang during the luminaria ceremony.

Emily Myette ‘17 walked for her sorority, Pi Beta Phi, and sang with LNO. “We were excited to support a cause that’s so special and personal to a lot of us,” said Myette, who mentioned that the luminaria ceremony was her favorite part. “It was really cool to see so many people from different organizations and backgrounds come together to support a cause that’s impacted us all.

After the luminaria ceremony, Outlook treated the participants to their annual Amateur Drag Show, where people volunteered to stand in front of the audience dressed in drag.

“It was a big adrenaline rush and we were nervous at first but really happy we did it,” said Davis Cameron ‘18, who participated with several of his Delta Chi fraternity brothers. He added, “We didn’t rehearse at all, we just went for it.” Bryan LeBlanc ‘15 gets his makeup done for the Drag Show at Relay for Life.

Brian LeBlanc ‘15 lip synced “Popular” from the Broadway musical “Wicked” while wearing hot pink stiletto boots, a red feather boa and a wig, complete with full makeup. “I’ve done drag at Denison about once every semester and a bit in high school, so I was ready to go out with a bang,” LeBlanc said.

“I think the real success are the straight students who did drag, especially the supportive fraternity men who weren’t afraid to put on a dress and have a good time. It’s a stark contrast with my freshman year, when almost all straight guys would’ve been afraid to have been called gay for doing the drag show.”

Aaron Carter, the early 2000s popstar, highlighted the evening’s entertainment. Chowdah opened for the singer. Carter, who is set to release a comeback album later this year, performed hits like “I Want Candy,” “Aaron’s Party” and “That’s How I Beat Shaq.”

The evening came to a close in the early morning, when participants were tired and drained from eight hours of walking. The event’s length is meant to impress upon participants the exhaustion and mental fatigue that cancer patients feel on a daily basis.