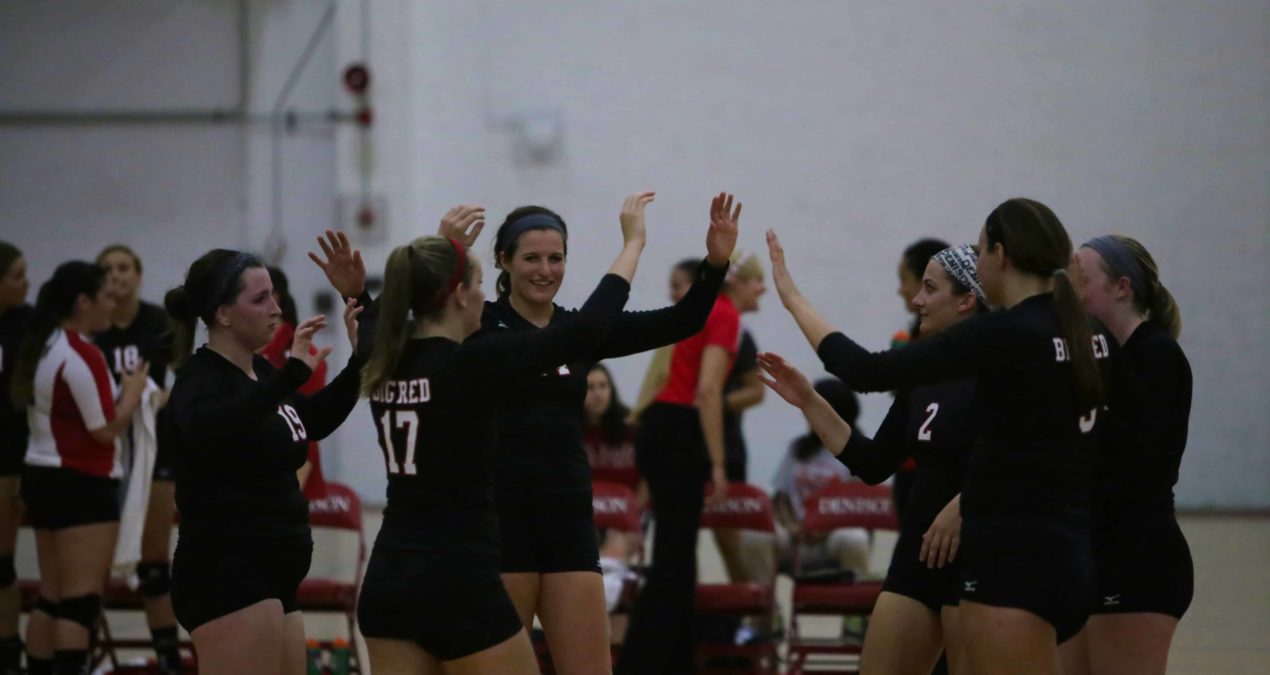 The volleyball team won two matches and dropped one in part of their seven game road trip, with only a week remaining before their first home match on the newly renovated floor of Livingston Gymnasium. Kenzie Kuhn ‘16 and Elena Lein ‘16 were a force to be reckoned with; Kuhn recorded 10 kills in 21 tries, and Lein finished with a .875 hitting percentage.

“This season I am playing right side for the first time in my life,” Kuhn said. “It has been so much fun to try a new position and see the game from a completely different perspective.”

“For being a freshman, Olivia’s been such a force to be reckoned with,” Leah Reinfranck ‘18 said. “Her consistency and energy on the court have helped our team so far this year.”

The women traveled to Hanover, Ind. on Sept. 12 for a tri-match against host Hanover College and Saint Mary-of-the-Woods. “The first game was a little rough against Saint Mary’s, but the next two sets were consistent in that our team was working together as one unit and our hitters were connecting with our setters,” Reinfranck said. “Saint Mary’s wasn’t a particularly good team, but we didn’t play down to their level.”

However, the Big Red were unable to carry the momentum from their first match into their duel against Hanover. The ladies fell in straight sets (25-14, 26-24, 26-24), although they put up a fight in the final two sets. Lock paced the team offensively, with 12 digs and eight kills, while Lein had the most blocks on defense, with six.

“The first game, we lost by a significant amount. We played scared, Hanover had control over the entire first game, and we just let them have it,” Reinfranck said. “The second two games were a lot more competitive, and they were a lot more fun to play, even though we didn’t end up winning the match. It was really good competition for us to have before going into conference.”

The team has played one home game this season in the Recreation Gym due to renovations in Livingston Gymnasium. “We can’t wait for our first game in there,” Kuhn said. “I think the excitement from being back and support from our fans will make it a really fun game.”

The Big Red will break in their new court when they host Marietta at 7 p.m. tomorrow evening.