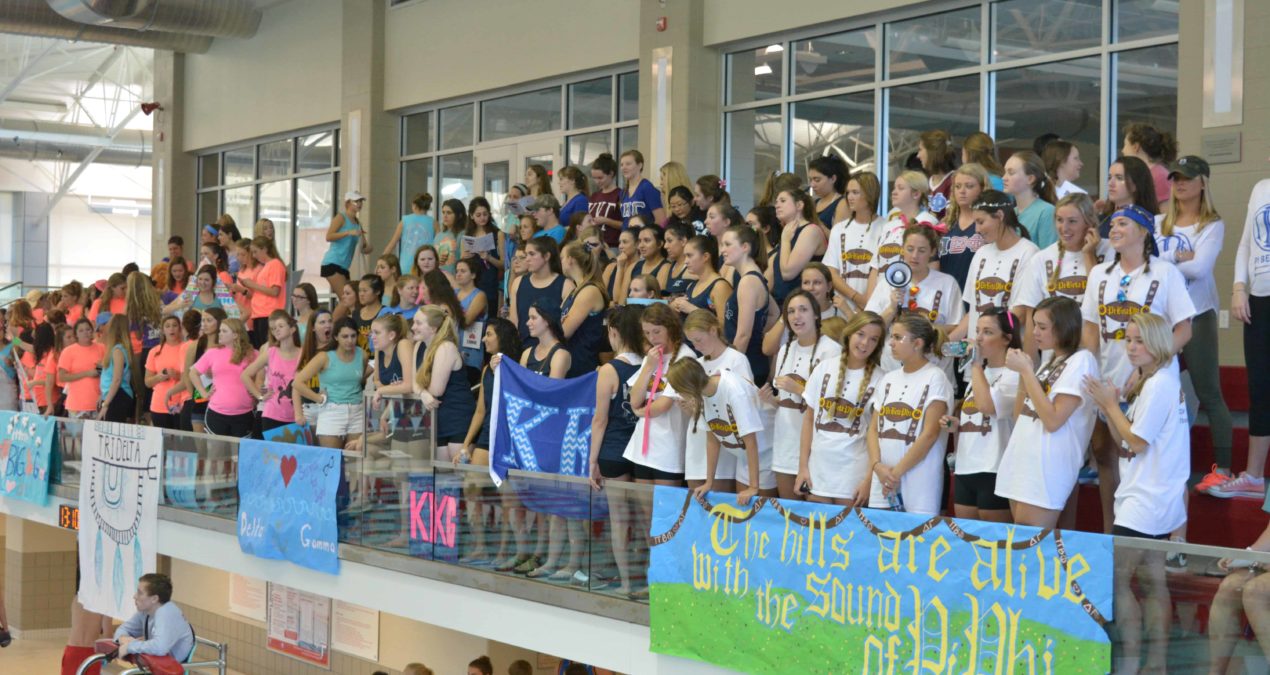 The Greek organizations showed their passions and personalities on Oct. 4 at Delta Gamma’s annual Anchor Splash event. With several different events for the sororities and fraternities to participate in, there was something for everyone to enjoy.

The Anchor Splash philanthropy tradition is a national event that supports Delta Gamma’s charity, Service for Sight. Aimee Maczko, who oversees FSL and works in the CLIC office, explained the widespread popularity of the event further, “Anchor Splash is done at many colleges across the U.S. and is a staple for most philanthropic efforts of Delta Gamma chapters,” she said.

The event began with a T-shirt relay where swimmers had to don Anchor Splash tees in the water and swap them on to their teammates while they’re soaking wet. This was followed by a ping pong relay. Fraternities and sororities competed against each other in a race to transport a ping pong ball on a spoon gripped between their teeth from one side to the other. After that was a race called “Save a DG” in which pairs from fraternities and sororities pulled a Delta Gamma member across the pool on a board.

The most anticipated event, however, was the synchronized swimming contest. Groups from each of the organizations prepared dance routines in and out of the water with varying musical themes  from  Disney to Britney Spears or country music. Some dressed accordingly, making the event more thematic.

Some noteworthy routines included Sigma Chi’s High School Musical theme, in which the members danced along to catchy songs like “We’re All in this Together” and “Bop to the Top.”

The synchronized swimming contest definitely seemed to be a hit and something everyone looked forward to watching. Sarah Higdon ’16 says she loves “seeing all the dances and what everyone comes up with.”

The winners of the overall competition were the Beta Theta Pi fraternity and the Pi Beta Phi sorority. Their synchronized swimming performances, including a Backstreet Boys number and a Sound of Music routine, were impressive, but Rachel Mabie ’16 of Pi Beta Phi emphasized that the “reason we won is because we participated and contributed to all the events leading up to it.”

Maczko commented on the event’s capacity to bring Denison students together, regardless of their Greek life affiliation. “Anchor Splash is a part of Denison’s fall semester that affiliated and non-affiliated students as well as faculty and staff look forward to each year,” she said. “It is a week-long tradition of events and competitions and raises a substantial amount of money to support a Licking County service for its citizens operating for another year.”

Ava McNicholas ‘16 agreed, saying that Anchors Splash “brings all the fraternities and sororities together and raises money.”
Specifically, the money from the Denison Delta Gamma chapter’s Anchor Splash event goes toward Service for Sight “which helps fund the Center for the Visually Impaired of Licking County,” Maczko added that, “The Center relies heavily on this week each year.”

Overall,  Anchor Splash was a noteworthy event rooted in Denison tradition. The events themselves showcased the Greek culture at Denison and how connected each of the members are to one another, as they graciously competed for a good cause and supported Delta Gamma’s fundraising efforts.