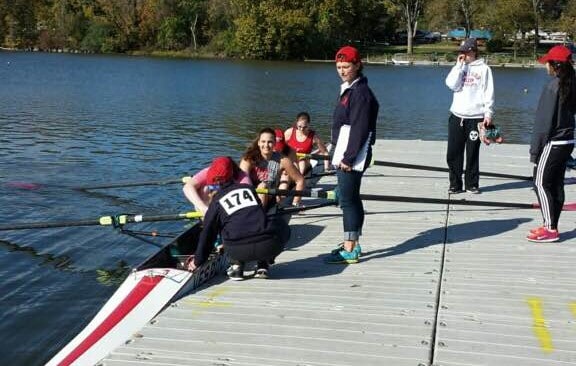 Amidst the fall foliage, the Denison Women’s Crew club team spent Saturday, Oct. 10 on the Scioto River competing in the Speakmon Memorial Regatta.

Hosted by the Greater Columbus Rowing Association, 29 teams gathered at the Griggs Reservoir to compete in fifty races.

The team spent all Saturday at the regatta. “Going to a regatta requires getting up early and spending the entire day with your team, which can really bring people closer,” explains the team’s president, Catherine Price ’17, who is from Pittsburgh.

“My favorite part of regattas is the race itself. When you’re in the boat, there is so much adrenaline and excitement,” says Charlotte Jones ’18 from Concord, Mass. “It’s really cool to see all of the hard work pay off, and to watch your boat working together as one unit instead of as individual rowers.”

Indeed, the crew team does put in a lot of hard work. Practicing five times each week, the women’s crew team is extremely dedicated. “We practice five days a week, two days in Mitchell where we have a crew room with a bunch of ergs set up, and the other three days we practice rowing on the water at the Hoover Reservoir in Westerville,” Price explains.

The team’s next regatta will be in the spring. Until then, they will continue to train and work hard. Anyone interested in joining the crew club team should contact Catherine Price, the team’s president.