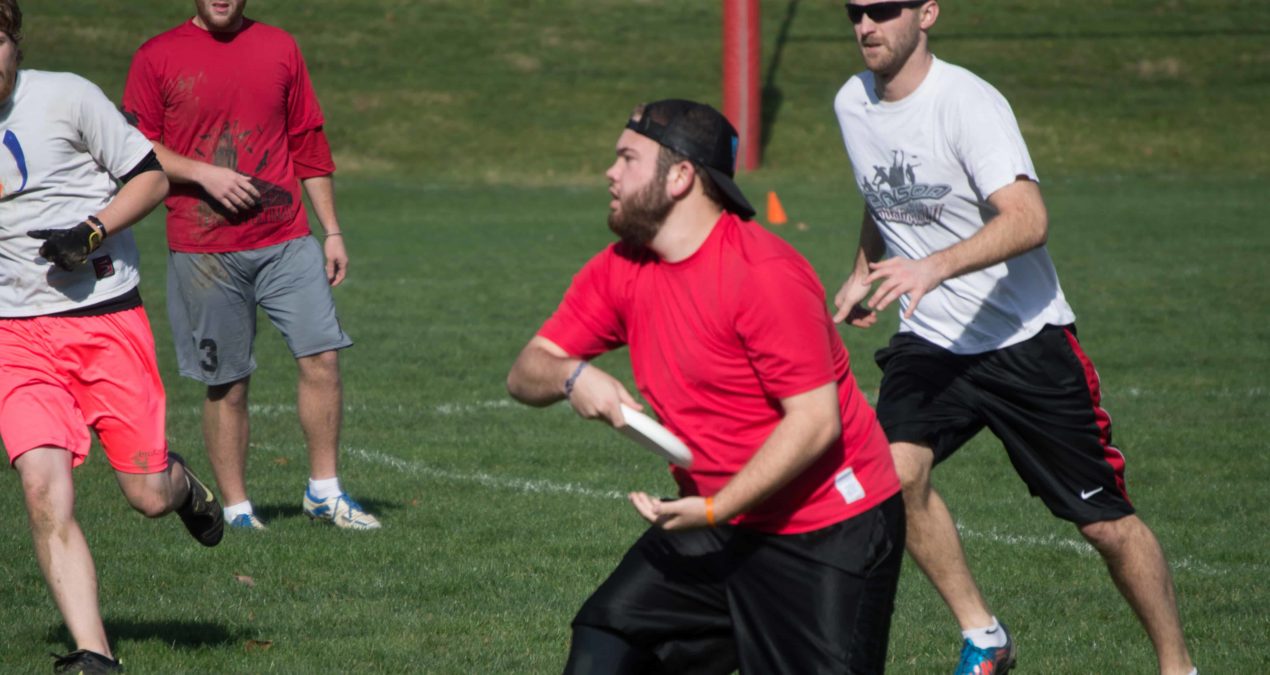 With one score needed to finish off Washington and Jefferson, Ben Wortham ’16 spots Teddy Eley ‘17 sprinting down the field. Wortham hucks the disk to his teammate, realizing he overthrew him.

Eley makes a late acceleration and reaches out to snag the disk out of the air. This would be the final point of the game and the final score of Eley’s junior year. The team swarms him, high fiving each other while also wondering how they would replace the speedy cutter during his time in Argentina next semester.

Denison’s ultimate team started their home tournament against their own alumni, losing 13-11. Even though the current players lost, this was the closest the current team came to beating the alumni team in over 10 years.

“It’s always a blast to have the alumni back on campus, these guys have all been where we are now and they always have advice and fun stories to tell,” said Greg Watson ’18. “We have alumni that were here long before any of us started playing, but you hear about them through the grapevine, so it’s great getting to know them.”

Along with the alumni, Wooster, Washington and Jefferson, Muskingum and Michigan State all came to Denison to compete in the tournament. The Denison alumni team, also known as Old Fuc, won the tournament late Sunday afternoon. Even though the current players were disappointed to not take their namesake tournament, captain Ben Wortham ’16 was pleased with the play from his team.

“The team was focused on consistency this weekend,” Wortham said. “We really stressed focusing on taking what the defense gives you and only attempting 100% throws. For the next tournament I think both the team and I need to work on keeping our energy up at the beginning of games to avoid falling behind early.”

The fall, typically considered a tune-up season for the Denison Ultimate Frisbee Club, shows what the team, as well as individuals, should focus on going into the spring season.

Every year the team has to make changes because they lose players to either graduation, injuries or other interests. For Watson, these changes required him to fill a new role on the team.

“I’m now what we call a handler, whose primary job is to throw the frisbee to the cutters, whereas last year I was a cutter,” Watson said. “The disc is in my hands far more this year, and it’s a lot of pressure. I don’t always get it right but there is always someone to help me out.”

While the alumni took the title this weekend, the current players can learn from their wise compatriots to make the necessary adjustments for the 2016 spring season.