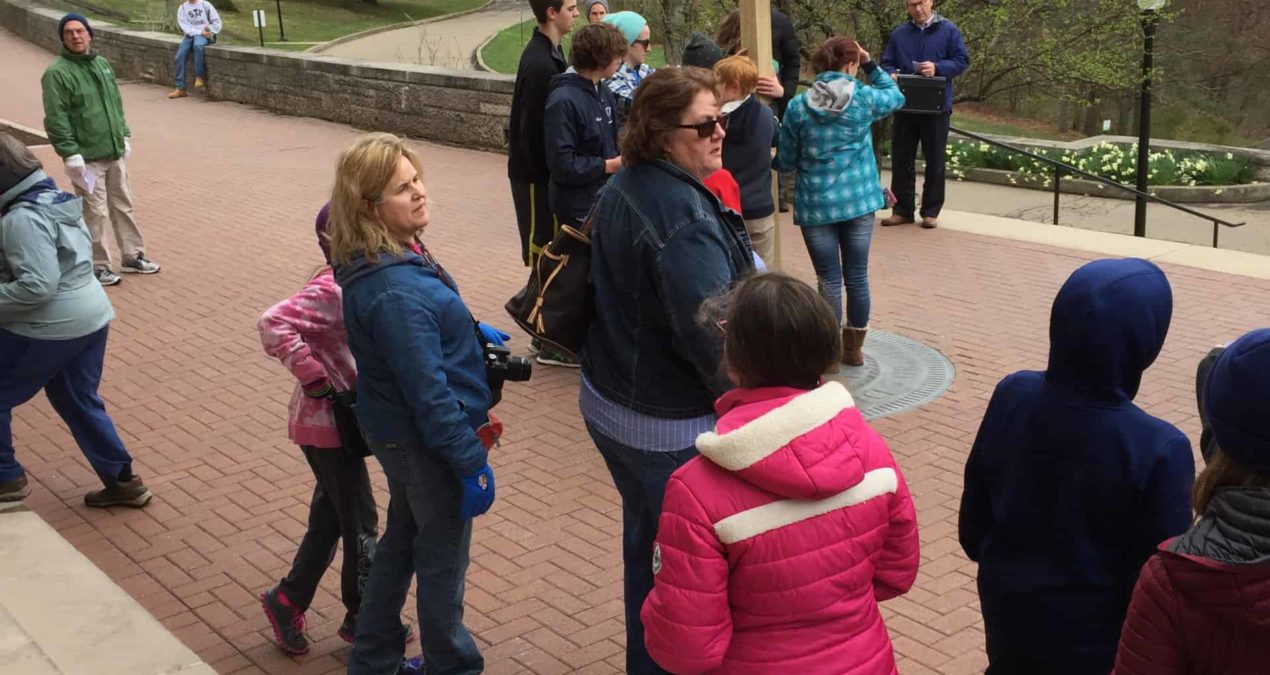 Huddled against the damp cold outside St. Edward’s The Confessor, around one hundred people from churches all over Granville, Newark and other local neighborhoods gathered around a wooden cross propped up in the parking lot.  In prayer and silence, the only sound came from the eerie death toll from the drum, played by local high school student David Daw.  The procession prepared to make the journey from where they stood outside of Granville up the hill to Swasey Chapel, mimicking Jesus’ walk up the hill to where He died.

The tradition of the Cross Walk has been present in the Granville community since 1996 when Reverend Steve Cramer continued the tradition after his move to Granville to serve at Centenary United Methodist Church.  The Cross Walk this year, which took place on Good Friday, March 25, marked the 20th year of the tradition in Granville.

Though the Cross Walk began in Granville through the Methodist church, several denominations were present, bringing in churches from all over the area.

To Susan Britton, director of discipleship at Centenary United Methodist, the fact that all of these denominations come together for this event is very important.

“We all believe that Jesus chose to die for us because he loves us and he wanted to restore the relationship of humanity with God.  Joining together in this way recognizes our shared origins,” Britton said.

She added, “For Christians, religion is not defined by a set of practices or observances, but by a relationship with God and others…Therefore Christianity implies inclusivity.  We don’t always get it right, in fact we often totally miss the mark, but that’s our fault – not God’s intent.”

The Cross Walk was a time of reflection even for those who did not participate in it, Britton recalled, remarking about how the cars would stop for the procession and wait for the cross, carried by local teens, to pass.

“One thing that stands out to me is that the cars often stop for us…  Jesus does that – he enters into our ordinary world and quietly but powerfully makes a difference,” she said.

Similarly, as the cross finished at Swasey Chapel, students respectfully moved around the crowd or sat on the wall to listen to the readings.

Britton read the last reading and then Fred Guevara from Centenary United Methodist Church closed with some final thoughts.

“Why is it called Good Friday?” he asked.  If it is just death then why is it good?  He told a story of how he’d asked child this very question, asking if someone died when really it was you who was supposed to die, what would you say?  The child said, “That would be good.”