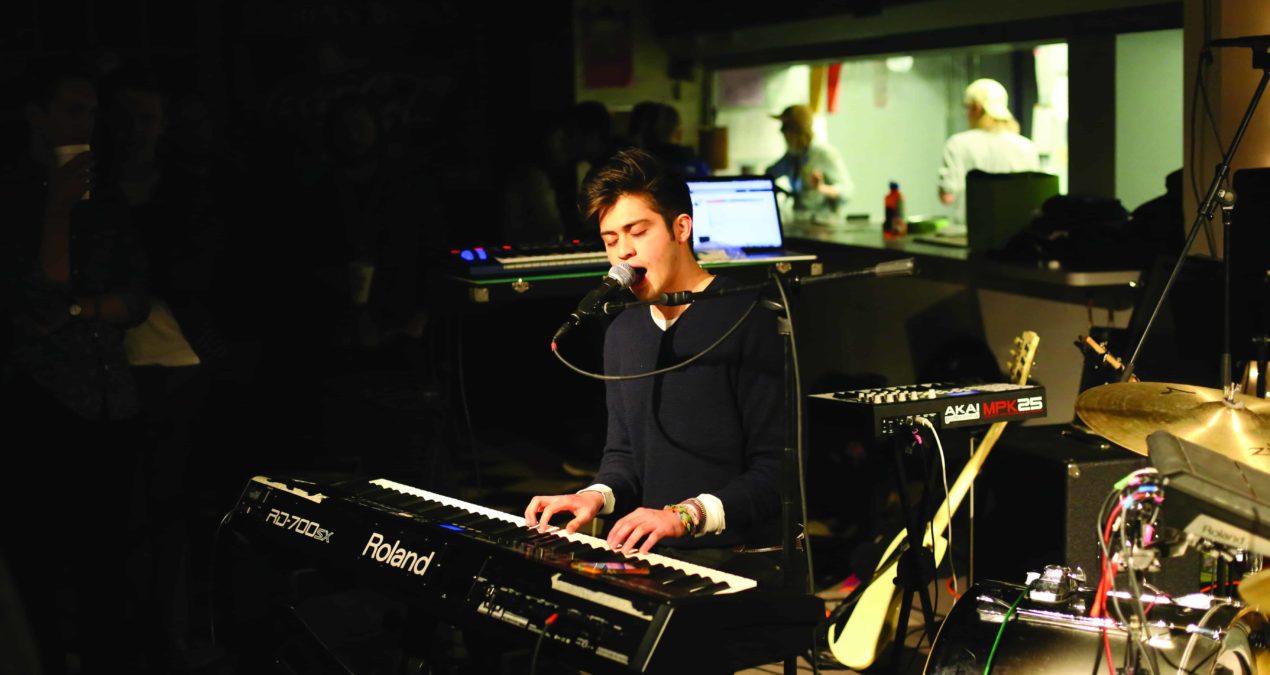 As soon as he started playing the piano, even the coldest hearted people in the room began to swoon.

Jacob Sigman, a musician from Ann Arbor, Michigan, opened the music showcase Saturday night at the Bandersnatch. The event was put together as a collaboration between the Doobie and the East Quad hangout.

According to Sigman’s Facebook, he combines influences of Motown, Soul and 60s era Beatles pop with a modern HiFi spin.

As he took to the mic, his voice was reminiscent of a classier, more artistic Justin Bieber; perhaps more of a soulful Andy Grammar. His songs were what I’d imagine a Hilltopper would use to serenade a lucky lady in the middle of Academic Quad.

While I enjoyed Sigman’s performance, it was slightly disappointing that the audience was kept waiting until 10:45pm for him to take the stage when he was supposed to be on at 10:00pm. Perhaps he was waiting for a pizza bagel, which is understandable since all Denisonians know bagels can take up to two hours to come out of the barely-functioning oven.

The smooth tones of Sigman were quickly replaced as the Cincinnati-based band Fluffer took over. Though Sigman’s brother, Owle Sigman, is the drummer for Fluffer, the contrast in sound between the two groups was significant.

The bandconsists of Patryck Apfylbeck on drums, Owle Sigman on guitar and vocals and D Topp on bass and vocals. Self-described as a heavy dance-rock trio, Fluffer’s funky and psychedelic style immediately brought to mind bands like Foals. Their music is something you can get lost listening to in the best possible way.

Their music is perfect to play at a party, kicking back with a can of PBR as recommended by Owen Smith.

Concert attendee Ashmita Das ‘18 echoed this sentiment when she said “Fluffer is really chill, I would definitely go to one of their concerts and listen to them while I hang out with my friends.”

The music showcase even managed to draw alumnus Ian O’brien ‘13 back to the hill. He said, “Before Saturday evening I’d never heard of Fluffer. However this spit-fire two-piece packs such a punch they seem like they could be the bastard offspring of a pairing between the wit of Vampire WEekend and the psychedelia of Tame Impala…a perfect indie blend.”

Overall the Doobie did an excellent job of bringing new talent to campus. Both Sigman and Fluffer offered different styles certain to tempt any music lover to make the trek to the Bandersnatch on a Saturday night.