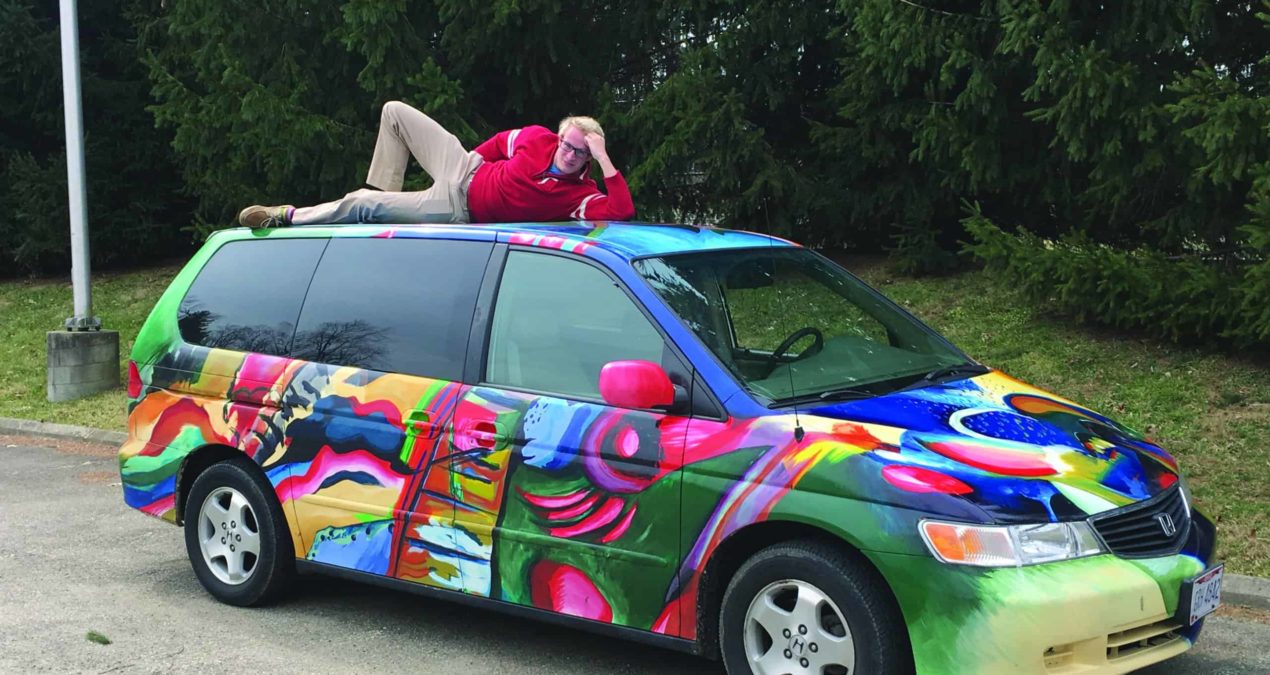 Located far away in an infrequently visited part of campus that Denisonians commonly refer to as “the freshman lot” sits a car that has built quite the reputation on the hill. Owner Ryan Stevenson ‘19 calls the masterpiece “Van Gogh” because of it’s unique paint job that transfoms the van from a vehicle, to a piece of art.

The communication major from Cincinnati, Ohio came across this car after his previous car died on his way back to campus from Columbus. His previous car was a grey minivan, so when purchasing a new car he decided to go the same route. “I started browsing the interwebs and found one of the craziest mini-vans I had ever seen. It had a painting representing water on it. I had never seen a painting on a car before” explained Stevenson.

The low price and obscure paint job is what attracted Stevenson to this vehicle, one that he describes as being perfect for him.

“In my mind, I said, ‘it’s perfect.’ I emailed it to my parents who picked it up.”    “Van Gogh” had been previously owned by an art professor at The University of Cincinnati who no longer needed the masterpiece. There was some initial apprehension when Stevenson initially laid eyes on the van.

“The first time I saw it in person, I thought, ‘Oh God… What have I done… literally everyone will laugh at me.’ Over time though, I have come to realize that it is perfect for me.”

The car has grabbed the attention of many people both on and off campus. He acknowledged its uniqueness has its pros and cons.

“It turns heads literally everywhere you go” Stevenson said. “There was a time when I was cruisin’ on the highway and someone sped past, then slammed their brakes, I looked over and the dude had his camera out, so I hit him the the dueces. I’m hoping to find that picture online at some point in my life.”

Stevenson is thankful for the many benefits of being a college student who drives a minivan.

“You can take 7 people legally anywhere. At the same time, you can put a door in the back if you need to. It also has a very average sound system that is perfect for bumping songs at a very moderate quality.”

Despite the positive attention the car has received, Ryan said it has also led to four tickets from Campus Security. “Campus Security has for sure memorized the car. If I park anywhere I’m not supposed to, it doesn’t even take 15 minutes to get a ticket.”

Though “Van Gogh” is the car’s most popular name, it also has been referred to “The Mystery Machine” and “Albert.” No matter the monicker, both students and staff will remember the legend that is, “Van Gogh.”