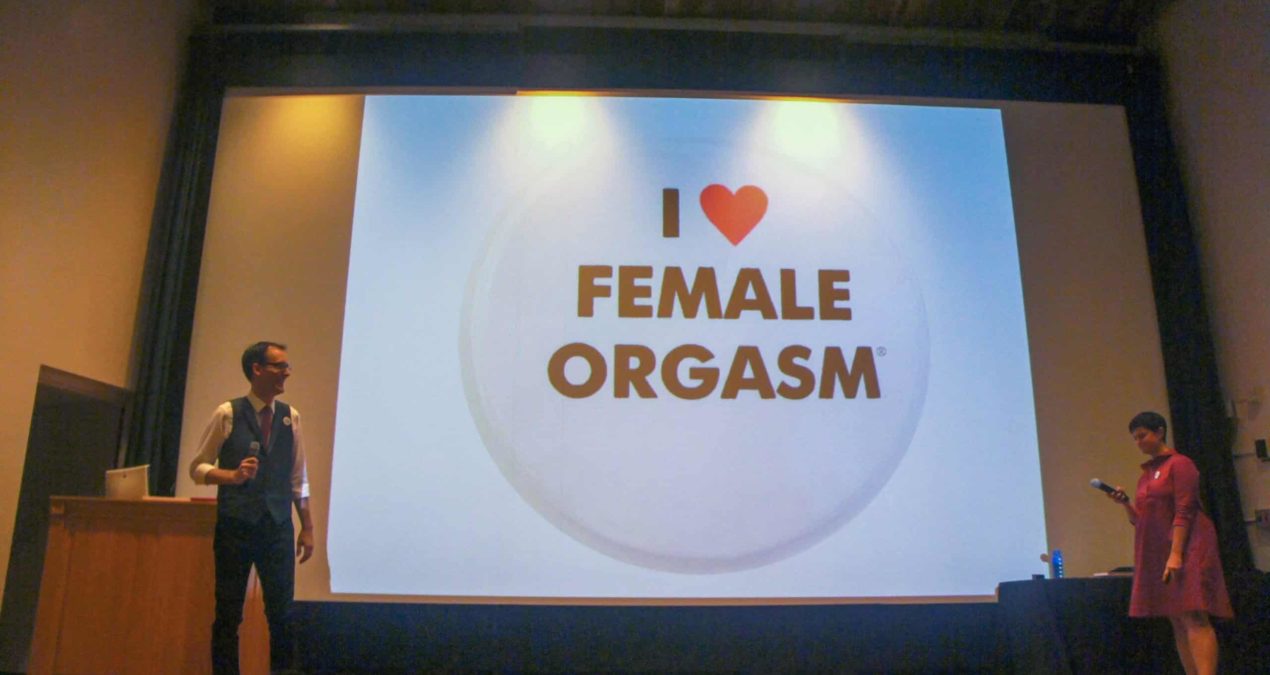 Let’s talk about sex. More specifically, the female orgasm. Often considered socially inappropriate to speak about, the I Love Female Orgasm sex education and female empowerment organization provided a bold, informational and comedic presentation on achieving the female orgasm. Through pairing factual information with witty puns, the audience was able to enjoyably learn about an area of sex education that is often disregarded in the classroom.

Slayter auditorium attracted a large crowd of students on Sept. 28 for the talk. The presentation opened with a clip from When Harry Met Sally where Sally imitates the sensation of an orgasm. This segued into a conversation concerning the trouble many women face in achieving an orgasm, often due to lack of conversation as well as awareness about the female anatomy. Maddie McKenney-Lydick ‘20 was surprised by “the amount of people in attendance” because she “come[s] from a town where barely anyone gets involved, especially if it’s a sex conversation.” McKenney-Lydick continued, “It was great to see so many people in support of the female orgasm.”

Representatives from I Love Female Orgasm kept the audience engaged with projected images of food to represent male and female genitalia so as to make the talk more playful. The interactivity between the presenters and audience members also stimulated further conversation.

They encouraged the audience to be aware of their own body and addressed the entire gender spectrum in the room. Tariq Longsworth ‘20 “never felt uncomfortable at any moment during the presentation” since he “was in a room full of people who came for the same reason” as he did.

In the middle of the presentation, the audience divided into gender groups and went to different rooms for further conversation about the female orgasm. Longsworth “didn’t mind the splitting of the room by genders” because “it creates a smaller setting with people who are like you, so someone may feel more confident in asking a question or sharing an experience.” In the men’s group, there was “a lot of dialogue happening with questions being asked that [he doesn’t] think would have been asked in the larger setting with everyone,” stated Longsworth.

However, McKenney-Lydick “was not a fan at all of the gender group split.” She explained, “It’s not like there is anything secretive that can’t be heard by any of the genders about orgasms.” But McKenney-Lydick conceded that she “left with a better understanding of the female anatomy and how to achieve the big O.”

Longsworth and McKenney-Lydick are in agreement that the presentation expanded people’s views concerning sex. They both recommend the presentation with McKenney-Lydick expressing, “It’s a breath of fresh air for females to be at the center of attention.” She added, “It’s easy to have a negative view of your body if you’re a female and it’s nice to be in a supportive group entirely focused on tearing down stigmas about our bodies and achieving the big O if you so choose.”

Overall, the Female Orgasm presentation was well received by the audience and generated further conversation on campus. The presentation explained that if people can talk about pleasure, they can talk about anything. Increasing awareness and dialogue about the female orgasm and sex overall accounts for improved and educated decisions concerning sex.