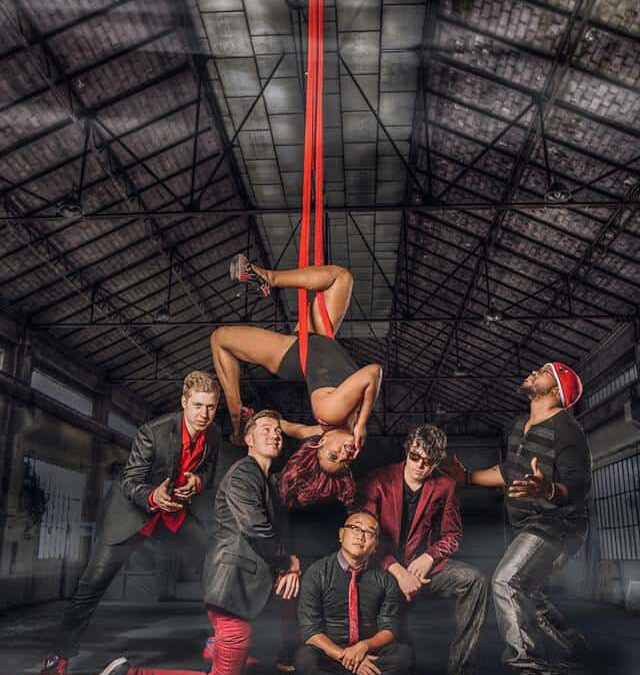 A bass that thumps, a quick fingered saxophone player, a trumpet that blazes like a horn and a female lead vocalist whose vocals vibrated in people’s chests, amplified the energy of unamused, stressed-out students at the Bandersnatch.

Mojoflo, a “neo-funk” band from Columbus visited Denison on one of the final Wednesdays of the semester. Some students worked on school work, but couldn’t help shaking to the groove of the music. Others, who preferred to take a break from school work, danced in front of the stage as the lead singer, Amber Knicole, energized the crowd by teaching dance moves.

“All together now!” said Knicole, as she encouraged the audience to follow her dance of stepping and pointing her left foot over her right leg, and pointing her finger in the air, a move straight from 70’s. The sound of the audience tapping feet as they copied her move, synchronized with the beat of the drums.

While stuffing pizza bagels in their mouths and sipping on milkshakes, students sang along to the band’s covers of modern songs such as “Treasure,” and jumped up and down to the band’s original songs, even though they didn’t know the lyrics.

Their original songs were an exciting blend of jazz, funk and hip-hop. Yet the atmosphere and sound of the band managed to be reminiscent of the 1920’s. The saxophone player and soulful voice of the female lead seemed to evolve straight from that soulful, blues-y era.

The ambience in the room was invigorating thanks to the band’s energy.

They performed as if they were in front of an audience the size of football stadium. They high-fived the crowd, making funny facial expressions at the audience near the stage

The band members would mouth the words to Knicole’s lyrics, making it undeniably noticeable that these members are close friends.

A fan blew in Knicole’s face, making her hair flutter in the air, and her facial expressions were sassy and captivating, including a killer “blue steel.”

Her level of fierceness certainly matched up to Beyoncé’s fierceness, stealing the eyes of the audience.

“I instantly felt engaged in the performance, and I couldn’t take my eyes off of the jammin’ base player or groovy lead singer,” said audience member Grace Rooney ’19.

Their energy was infectious and each band member had a charismatic way of presenting themselves by pointing to the audience and even calling audience members out from the crowd just to say hello.

An investing and high energy performance made a great Wednesday night. It allowed students to take a break from the swamping amount of school work assigned during this time in the semester.