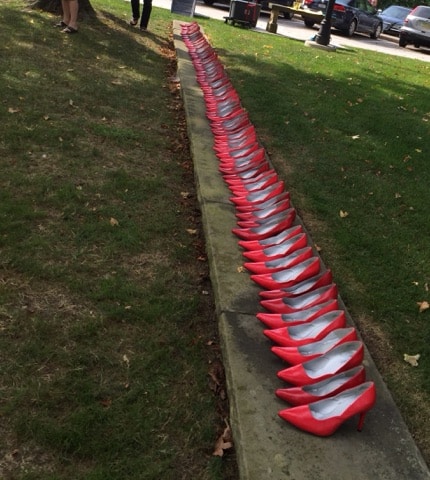 2nd annual Walk a Mile in Her Shoes raises awareness

In an effort to put an end to rape, sexual assault and gender violence, men and women in the Denison community, many associated with fraternities and sororities, gathered at the Granville Inn on Sep. 16. Denison’s men readied themselves to put on red pumps and strut one mile down the road to Lamson Lodge.

This march is known as Walk A Mile in Her Shoes and its goal is to raise awareness about sexual assault against women while also offering the opportunity for men to gain insight into a woman’s perspective of the world .

The walk was founded by Frank Baird in 2001after having worked for the Valley Trauma Center, now named Strength United, since 1993 where he looked to “increase the opportunities for men to contribute to efforts to end sexualized violence.”

This march is an international event with a growing local influence in the Denison community.

Just last year the event was introduced by former Interfraternity Council (IFC) president Jared Kriwinsky ‘16 after he attended an IFC conference. The march was added to Greek Week, a week of fraternity and sorority volunteer work and celebratory events, and returned this year with great anticipation.

Before heading to Lamson Lodge, current IFC president Ollie Dowd ‘17 offered opening remarks to the participants. Dowd began by acknowledging Kriwinsky for introducing the walk to Denison and thanked everyone that turned out for the event. He then gave background on the event, citing the founders and statistics of sexual assault victims.

Dowd explained that spreading sexual assault awareness and prevention is near and dear to his heart because he sees it as a pressing issue on and off college campuses. He expressed that Walk A Mile in Her Shoes as a “perfect mode in which we as a community can combat sexual violence.”

Along with the need for greater recognition of sexual assault, Dowd mentioned the need for greater bystander intervention. He asked that everyone respect the integrity of the march through walking in silence and reflecting on sexual violence. His goal was everyone to walk away from the event with “a deeper understanding of sexual violence and a new perspective” because “the period of reflection during the walk is a powerful moment for each individual and [he] will never forget the feeling it gives [him].”

While on the walk, all that could be heard was the clicks of heels. There were the occasional cat calls from passing cars but participants did not pay mind to these interruptions. The walk lasted for ten minutes and participants were met with water and cheers at Lamson Lodge. There were two white boards for participants to finish the phrase “I walk because…” and the question “Why can’t we…”

Carter Loesch ‘17 explained that his first time walking in the event “hurt a lot,” but helped him to “better understand the daily pressures faced by women.” He added that the walk will help to further conversations about sexual assault on campus. For John Sullivan ‘17 this was his second time putting on the distinctive red heels for Walk A Mile in Her Shoes. “The serious tone of the event comes out once people start walking and makes them realize that it’s a topic that hits home,” Sullivan said.

In comparison to last year’s walk, IFC had only “reached out to the fraternities to attend and did not encourage the sororities nearly as much,” Dowd explained.

“After the event, [they] quickly realized this was a mistake and this year [they] made sure to reach out to all of the sororities.” In addition, Dowd said, “Last year also included a portion at the end where [they] had a speaker from the Newark Rape Crisis Center speak as well as several people share their own personal stories regarding sexual violence.”

Dowd observed impacts within the Denison community after the walk since “it brings awareness and conversation about sexual violence to the forefront of campus conversation.”

He mentioned that many people thanked him for hosting the event, showing that the event “succeeded in bringing awareness to the issue in an unique, successful and organic way.”

Overall, the walk was a success with a large turnout and many were empowered to continue spreading awareness about sexual assault. Morgan Phoenix ‘17 expressed that “people don’t often think about sexual assault in their daily lives” so the walk served as “a visual reminder of women’s struggles.” Phoenix added that the “men’s participation showcased solidarity in [the Denison] community.”

Next year’s walk is hoped to be just as successful, if not more, based on the large interest in preventing sexual assault from Denison’s community. “If each person in our community made even the smallest effort to fight sexual violence and be that brave bystander who intervened, the campus would benefit greatly,” concluded Dowd. To learn more about Walk A Mile in Her Shoes, visit walkamileinhershoes.org.