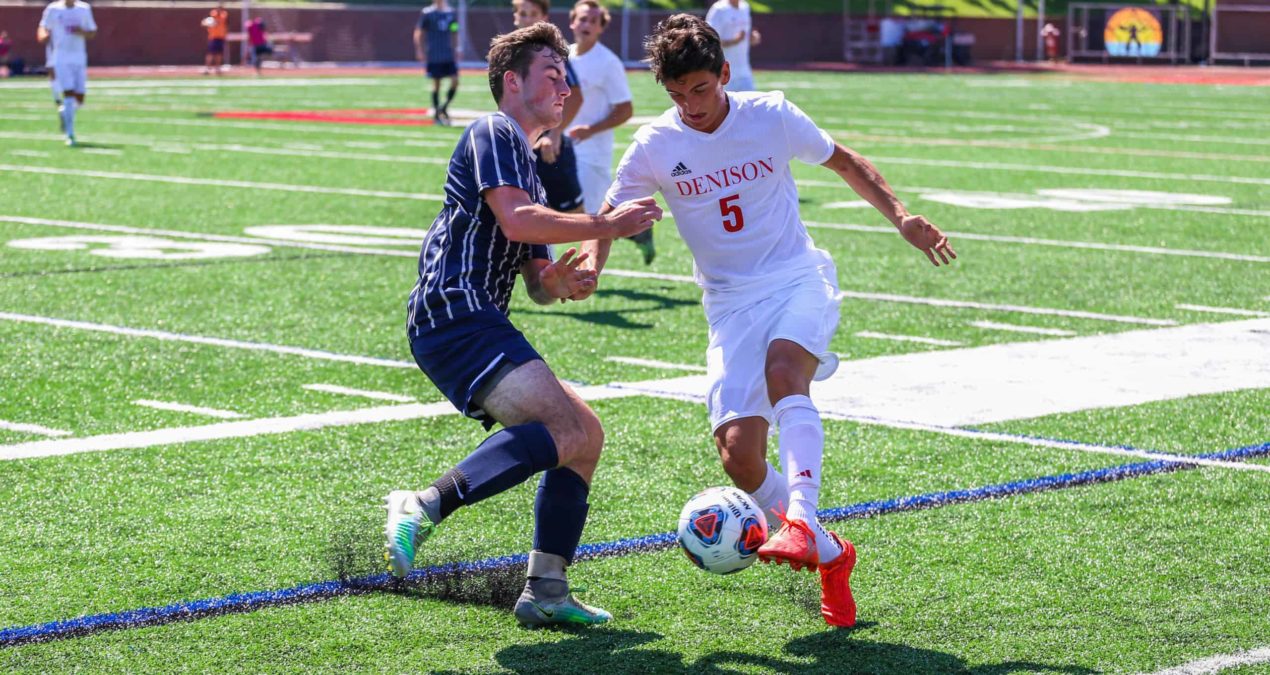 The Big Red out scores Marietta in overtime 2-1 win

With sweat dripping down his face as he sprinted down the field, Kennedy Kommor ‘17 quickly kicked the ball to Henry Pohlman ‘17 for the game winning goal. The goal put the Big Red ahead of the Marietta Pioneers with less than two minutes remaining in overtime last Sunday. The 2-1 victory against Marietta College puts Denison at a .500 record so far this season.

Piper Stadium was filled with students, faculty and staff on the first warm sunday afternoon of the school year. Marietta started off strong with a goal right off the bat at the beginning of the first half. Denison was not afraid and attempted 8 goals the first half.

Marietta saved three goals during the first half and the Pioneer’s tough defence made it difficult for the Big Red to score but with eight minutes left in the first half, Jasdeep Khaira ‘18 scored his first collegiate goal after a foul was called against Marietta. Denison was finally on the board. Both teams went into the second half with 1 point each.

Both the Big Red and the Pioneers saw no addition to the scoreboard the second half which sent the Pioneers and Big Red into overtime. Marietta attempted to score but just barely missed Denison’s goal, it was then when the Big Red had the opportunity to take home a W. Pohlman successfully shot from an assist by Kommor to get Denison the needed point to win the game.

The men hope to go far this season and Jake Girardot ‘18 said that the team has prepared well for this season during the off season, a long and hot preseason and with the recruits and new players the coaches brought in.

“They wanted to be 2-3 players deep at every position to push the starts to play better and continue to grow as players,” Girardot said. “[we] have good options for players to come off the bench as subs or replacements for injuries.

Girardot says that the team has one goal, to make it to the conference tournament. In the past couple of years the team has finished 5th, just one spot shy of qualifying for the tournament. With plenty of returners and skilled new players the team has become better at attacking and defending but is always looking to improve in those areas to take them to the tournament at the end of the season.

“We are very experienced in the back as well as in the defensive part of the midfield. If the defense can continue to keep games close and give our offense chances, I think this will be a fantastic season for the Big Red,” Girardot said.

Denison will travel to Marietta College this weekend to play Westminster and Adrian. Their next home game is a week from tomorrow against Capital University.