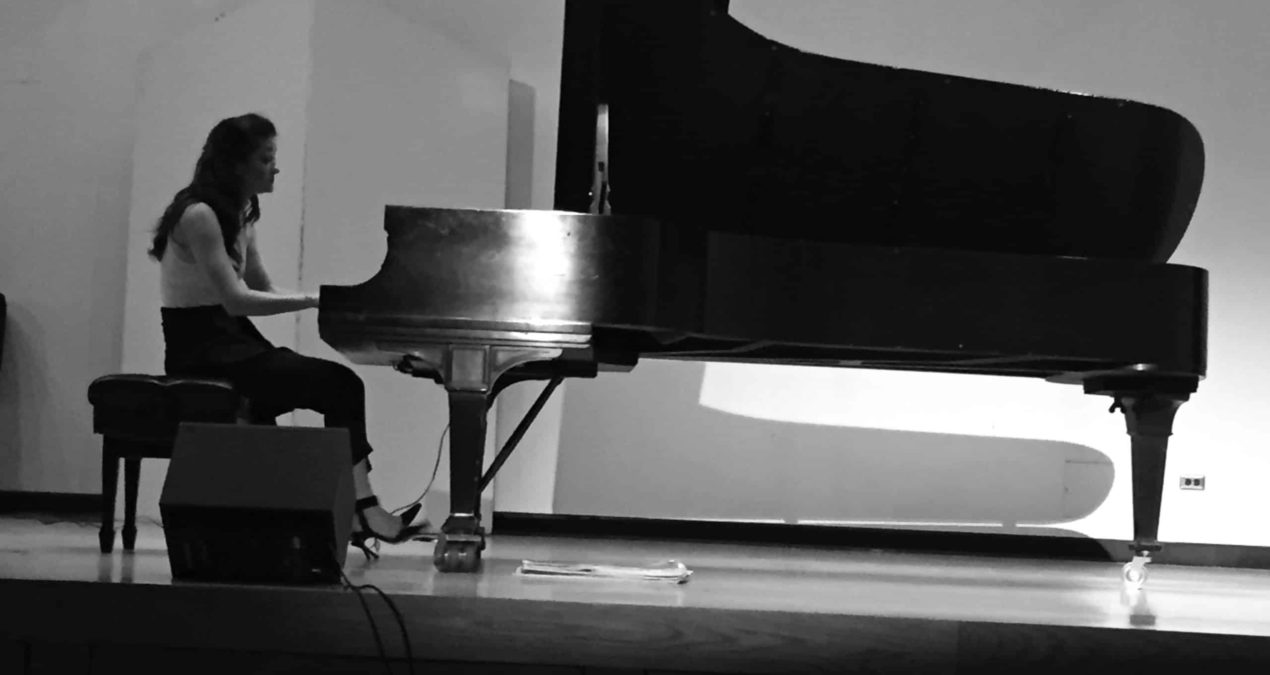 If you were expecting traditional piano music, you might have been disappointed with Christina McMaster’s piano recital.  But if you were looking for something unexpected, dynamic and edgy, then McMaster delivered all of that and more.

The British pianist is one of the most active pianists in the UK and is well known for the way that she curates her piano recitals.  The word “curate,” which might seem like something that belongs in a conversation about museums, actually refers to the way piano pieces originally written by other musicians are then altered and reorganized in combination with other pieces to create something new and fun in a recital.

McMaster certainly did that in her performance last Wednesday in the Burke Recital Hall.  Although she had some works that combined more traditional pieces with other songs or other media, and others that displayed her variety of musical talent, the show-stopper really came toward the end with a more innovative piece.

The song that really beat all was a song McMaster described as a battle between her human self and her robotic self.  While McMaster played the piano live, there was also a video of her playing a different piece that was projected on the wall.  The two piano pieces complimented each other in weird ways, while also creating that conflict she described.  It was an eerie and haunting piece that was completely captivating, and brought out the power that McMaster has as a musician.

Although this robotic battle was arguably the best that night, McMaster’s performance was really well curated throughout the night.  She began with a piece whose title means “the sails” and is a tribute to the movement of the wind.

The lights went out, leaving only a small lamp that illuminated McMaster’s sheet music, and then a projector showed film of various plants and trees moving in the wind.  The video, which began in black and white and alternated into color at times, had a strange surrealistic quality to it, as the piano music created a sort of dreamy, in-between state.  There was almost a discontinuity between the piano and the video, as McMaster bent her head and moved her hands rapidly from one end of the piano to the other, creating somewhat harsh and violent tones that brought out the eeriness in the video which ebbed in and out of the reality of color and the surrealistic black and white images.

But McMaster showed another side of her style in more lighthearted pieces following that one, keeping her head high and using a bouncier movement in her hands and arms.  An especially exciting piece included twenty thirty-second pieces which were put together to represent different points of view at a public event.  For example, one piece would include a wedding tango, and another would be representative of a dog which was present at that wedding.

Adding to the fun of the performance, McMaster was full of knowledge of the lives of the musicians who’d written these pieces, and she recounted some of these anecdotes before playing.  Before the round of thirty-second pieces, she said the first one the musician had dedicated to “all those who hate him.”  At another point, she mentioned that the musician had intended a song to be an argument between two people, and that you could tell who was “speaking” in the argument by the repetitive rhythms which would be distinct from one another until the climax of the argument where both rhythms combined and those who had been arguing had forgotten what they were arguing about.

McMaster also played an absolutely beautiful piece written by Hyekyung Lee, an assistant music professor at Denison.  It felt special and intimate to see McMaster play the piece with such grace and to feel the respect that she had for Lee’s work.

The performance had a lot going for it, and even though it was a small crowd, McMaster catered well to the audience and made it feel intimate.

Katherine Truitt ’20 agreed, saying, “The pianist was casual…it was definitely a different feeling than what I expected from a professional piano player, but it was still good.”

McMaster, through her curation of classic pieces amongst newer and original pieces, created a recital that truly stunned.