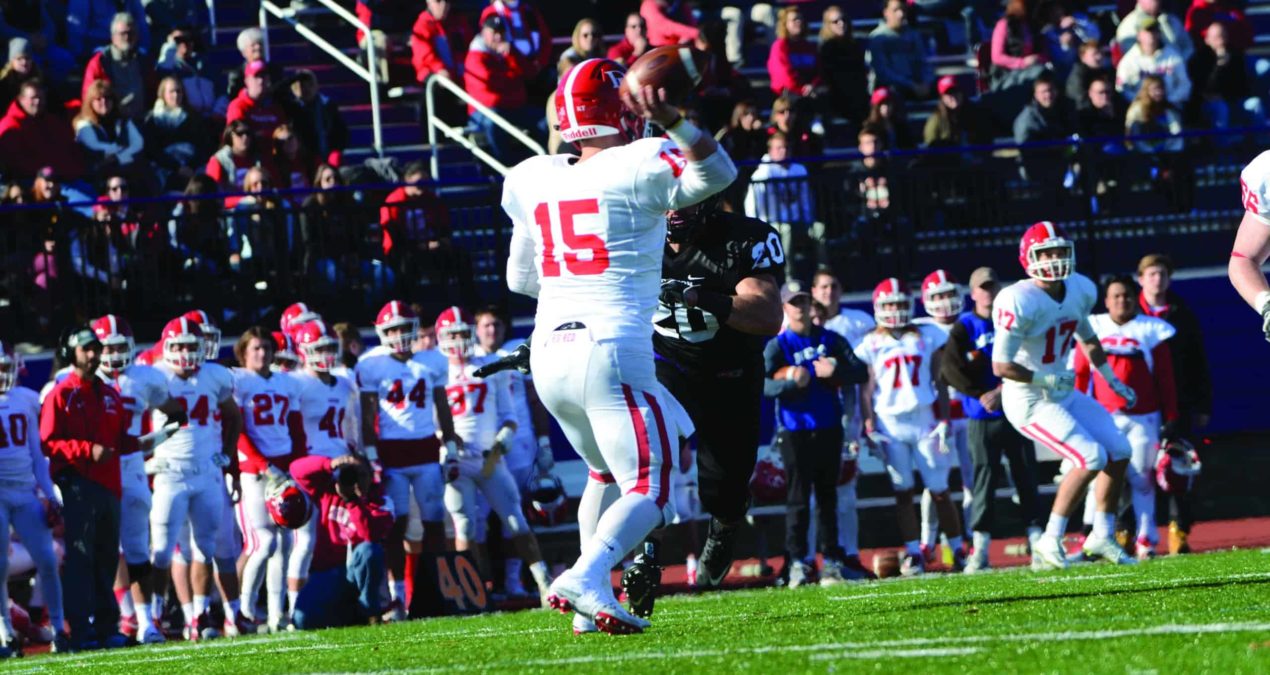 A quick 24-0 first quarter lead was more than enough as the Big Red blew out Kenyon, 41-12, to finish the regular season. It is the 11th consecutive victory for Denison over the Lords.

Tommy Iammarino ‘17 threw four touchdown passes in his final career game, two of which went to his brother, Matt ‘18.

“I feel like I can officially retire from football now,” the elder Iammarino said. “We’ve been playing football together since third grade and those two touchdowns are probably my two most favorite TDs I’ve thrown to him.”

“It honestly was the perfect way to go out,” Matt Iammarino said. “All week long, Tommy and I tried to approach this game just as any other, but in the back of our minds I know we both knew how special this game was. It’s a great way to end our career together in a game I’ll remember forever.”

Cody Farley ‘19 broke the 100-yard threshold for the second time this season, setting a new career-high with 173 rushing yards. He also ran for a score and caught seven passes. David Weimar ‘19, fresh off being named Academic All-District, caught seven passes for 52 yards and a touchdown.

The scoring was rounded out by Conor Dunn ‘17. In his final career game, the senior placekicker broke two records. He made a field goal in the first quarter to break the career record. In the third quarter, he made a 48-yarder, the longest field goal in program history.

On defense, the Big Red forced three Kenyon turnovers. The Lords were only able to get into the red zone one time. Their leading receiver, Brian Hunca, was held to just 41 yards and no touchdowns, a fraction of his conference-leading season averages. In their final career games, Andrew Baird ‘17 picked off two passes while Anthony Sernus ‘17 led the Big Red with seven tackles.

“The first pick, I was blitzing off the edge,” Baird said. “The QB was running a RPO (run-pass option) and I saw him pull the ball to throw to the receiver, who I assumed was behind me. I jumped just hoping to block his view. I was actually shocked when the ball basically drilled me in the chest and right into my hands. For the second INT, we were playing our normal quarters coverage. As I hedged off my guy and released him to the linebackers, I drifted back to my zone. Luckily, one of the linemen got their hands on the ball, which slowed it down enough for me to step in front of the receiver.”

“Playing four years of college football here at Denison has been a dream come true,” Baird added. “I’m extremely grateful for the opportunity to play alongside some great teammates and a passionate coaching staff. It still hasn’t really hit me yet, but I know I’m going to miss the game that’s been a part of my life since fifth grade.”

With the win, Denison finishes the season 8-2. It is the ninth time in program history a team has won eight or more games in a season and the first time since 1986.

It was a banner season on both sides of the ball. Denison scored 300 points in a season for the fifth time in program history. Defensively, they allowed just 181 points, the fewest since 1989. Their point differential of +143 is the best since 1986.