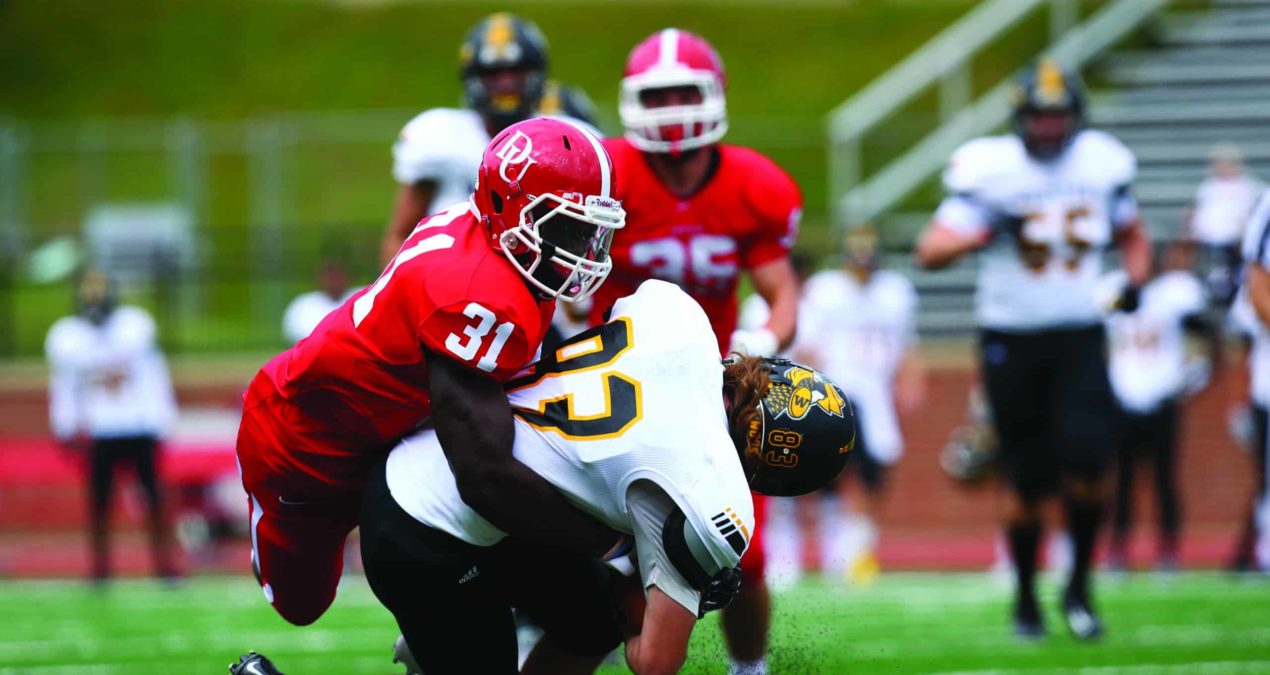 The Big Red made the long trip to Greencastle, Ind. and came back empty handed, falling 30-16 to the DePauw Tigers.

It was an uncharacteristic game for the Big Red, but much credit goes to DePauw for scouting Denison and pulling the upset.

The team that entered third in Division III in third down conversion percentage was stopped on 11 of 17 attempts. The offense that only had two intercepted passes all season threw four picks. And the defense that normally pressures opposing backfields to the tune of 4.29 sacks per game could only muster one.

“I give a lot of credit to them,” team captain Anthony Sernus ‘17 said. “It was senior day for them, they came out pumped and ready to go, and had a good game plan, and they executed well. I think defensively we did struggle a little bit, especially in pressuring the QB. We struggled at times to get off blocks and get to the quarterback.”

Denison could not string together a drive. Of the 14 possessions that began in Denison territory, only one ended with a score. Only three drives lasted longer than six plays. The Big Red ran the ball 22 times for just 12 yards.

That is a testament to the DePauw defense, pressuring the Big Red offense throughout the contest.

The Big Red secondary was solid, with safeties Andrew Baird ‘17 and Ryan Zinkula ‘19 each intercepting a pass and the duo combining for 22 tackles.

“As safeties, we are at an advantage because the offense doesn’t usually account for us in their blocking scheme,” Baird said. “So our defensive gameplan always sets us up for success.”

Despite the loss, Denison still has plenty to fight for during the season’s home stretch. They are 7-1 overall and in a three-way tie atop the North Coast Athletic Conference standings. As long as the Big Red win each of their final two games of the season, they will earn at least a share of the NCAC championship for the first time since 1986.

This Saturday, Denison hosts Wabash, one of the teams they are tied with in the conference standings. The Big Red have not beaten the Little Giants since 1990.

“We still control our own destiny,” team captain Drew Gray ‘17 said. “A win in our game this weekend against Wabash means we can still win the conference, so it is business as usual this week.”

Saturday is also Senior Day. All 18 members of the football senior class will be honored prior to the game’s 1 p.m. kickoff.