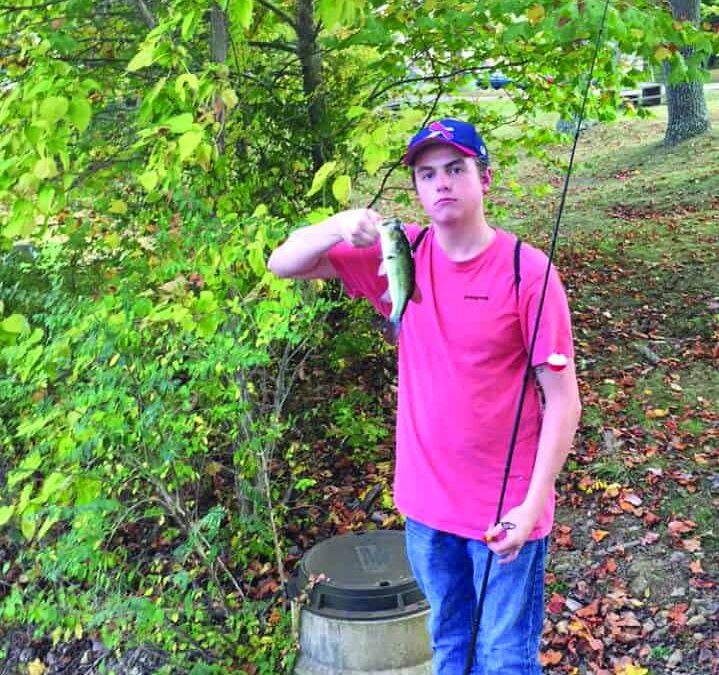 Edward Bailey ‘17 keeps his fishing gear in his car, so he is always ready to throw a cast out in Ebaugh pond. “Saturday morning, you’re shaking off the night before, it’s sunny out and someone texts me saying ‘hey let’s go fish,’” he said.“It’s definitely not like we are waking up at 6 in the morning and fishing all day while everyone’s miserable and their hands are bleeding.”

Bailey, a PPE major from Springfield, Ohio, is the president of the Denison Anglers, a club for people of all experience levels who are interested in fishing. The club fishes for pike, bass, and sometimes trout in the Ohio area. On campus, they go to Ebaugh pond.

“All you really need is just a rod and a smile. You can catch fish on Ebaugh with just a hook,” said Bailey. One member, Willard Gerding ‘20, ran out of bait and caught a fish with a gummy worm.

Ebaugh is not known on campus for its cleanliness. Bailey, swam in that “nasty, nasty pond” while pinning his girlfriend last semester. “Sometimes I think the fish are toxic or have webbed feet and stuff. But for the most part, it’s just another pond. There’s actually some good bass in there,” he said.

Even days where they don’t catch anything are good days. “It’s mindless to cast and relaxing to sit outside in nature all day, and that’s what I enjoy most about it,” said Lucy Pearsall, a junior who has been fly fishing and spin casting since childhood. She is also the designer of stickers bearing the club’s logo, which the club hopes will increase visibility.

The club currently does not receive any DCGA funding because the previous president did not request any money for the organization. Bailey explained he has been trying to revive the club.

“It fell on hard times my sophomore and junior year, it kinda didn’t really exist. I guess it did, in name and title, but it didn’t really do anything with it. When I took over I tried to make the Facebook group and get more stuff going on. So, we’ll do fly tying, trying to get some trips going, made stickers, might bring some professional fishing guides in to help us tie some flies and talk about tactics, so it’s been a good time,” he explained.

The club releases the fish they catch. One time when Bailey caught a trout, the hook got stuck in its mouth.

“I ended up having to cut it off, and I got pretty upset. I was like, alright, I might give up fishing after that. Like, that hurt. And then I looked up some more things and most hooks on the market, with the exception of some heavy saltwater hooks are designed to rust away in like a day, so it just dissolves in the fish.”

“D’anglers is a great club, fishing is one of my favorite activities and being able to continue that at Denison has been a great experience,” said Gerding.