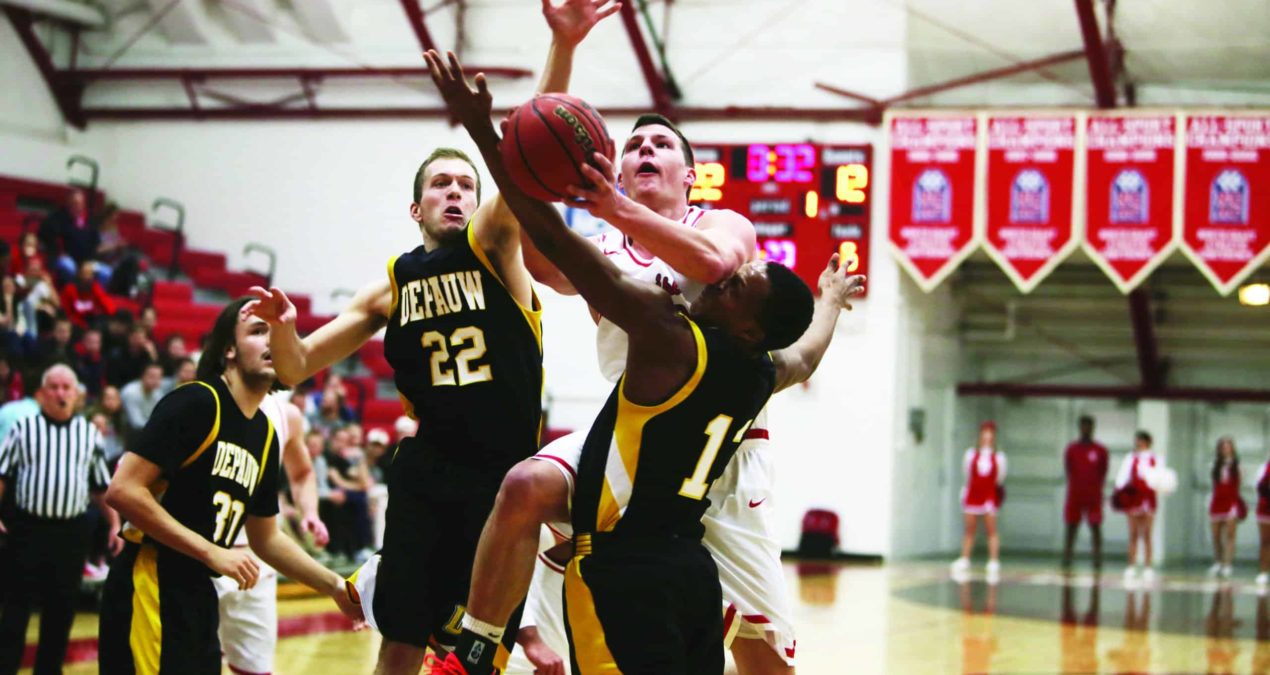 After last year’s North Coast Athletic Conference tournament championship, the Big Red could have started this season going in one of two directions. They could slump back to the middle of the pack, deeming their NCAC Tournament run a fluke. But, they chose the other direction, and are off to the best start since 1926-27. At 6-0, they have already asserted dominance over the NCAC’s best.

Playing at 11th-ranked Wooster, the Big Red got out to a 13-0 lead but found themselves down 44-35 with 12:36 left in the second half. That’s when Jett Speelman ‘17 started a comeback, first with ten points during a 12-2 Big Red run that saw them retake the lead.

“I got into a really good flow of the game and felt like I could score at will,” Speelman said. “My teammates were hitting me with some great passes and we were able to rally back.”

The Fighting Scots would retake the lead on the ensuing possession, but it would last all of six seconds as David Meurer ‘17 found Claude Chandonnet ‘19 for a three-pointer and a 50-48 lead. Speelman would add six more points over the game’s final seven minutes as the Big Red protected a small lead.

With just over two minutes left, head coach Bob Ghiloni was going to give Speelman a breather, replacing him with fellow senior Bret Woolard ‘17. When Wooster called a timeout, Woolard went back to the bench and told Ghiloni he wasn’t checking in.

“They had put me up at the scorer’s table to check in, but when they called timeout I said to keep [Speelman] in,” Woolard said. “Just told [coach] that we had to ride him out the rest of the game because he was taking over.”

Speelman would score on the Big Red’s first possession after that timeout. He finished with 25 points and 10 rebounds, his first double-double of the season.

“No matter what the score is, our team battles,” Speelman said. “We’re a bunch of grown men playing grown man basketball. We’re pissed off for greatness. And if you’re not pissed off you’re satisfied with being mediocre.”

The Scots would keep the game too close for comfort, climbing to within three with just under a minute left. With the shot clock winding down an a taller defender draped on him, Meurer launched a deep three pointer. Turns out, the banks are open late in Wooster, as the shot went in off the backboard, giving Denison a 65-59 lead that would hold.

When asked about the shot, Meurer said “I called game,” a nod to Paul Pierce banking in a game-winner for the Washington Wizards during the 2015 Eastern Conference Semifinals.

The Wooster win put the Big Red at 5-0 with a big matchup against Kenyon. The offense could not get into a rhythm, shooting a season-worst 37.5 percent from the field. But Denison posted impressive results on the glass, out rebounding the Lords 49-25, including 19 offensive boards.

In the end, the Big Red got a scrappy, 67-58 victory in front of 925 fans at Livingston Gym. Coincidentally, the last time a Denison men’s basketball team started 6-0, they were coached by Walter Livingston.

The men’s basketball team will put their undefeated start on the line with two road matchups against conference foes. They will travel to Oberlin on Wednesday, Dec. 7, before travelling to Springfield, Ohio, to take on Wittenberg on Saturday, Dec. 10. They will close out the 2016 portion of the season on Dec. 14 at Capital before resuming play in the new year.