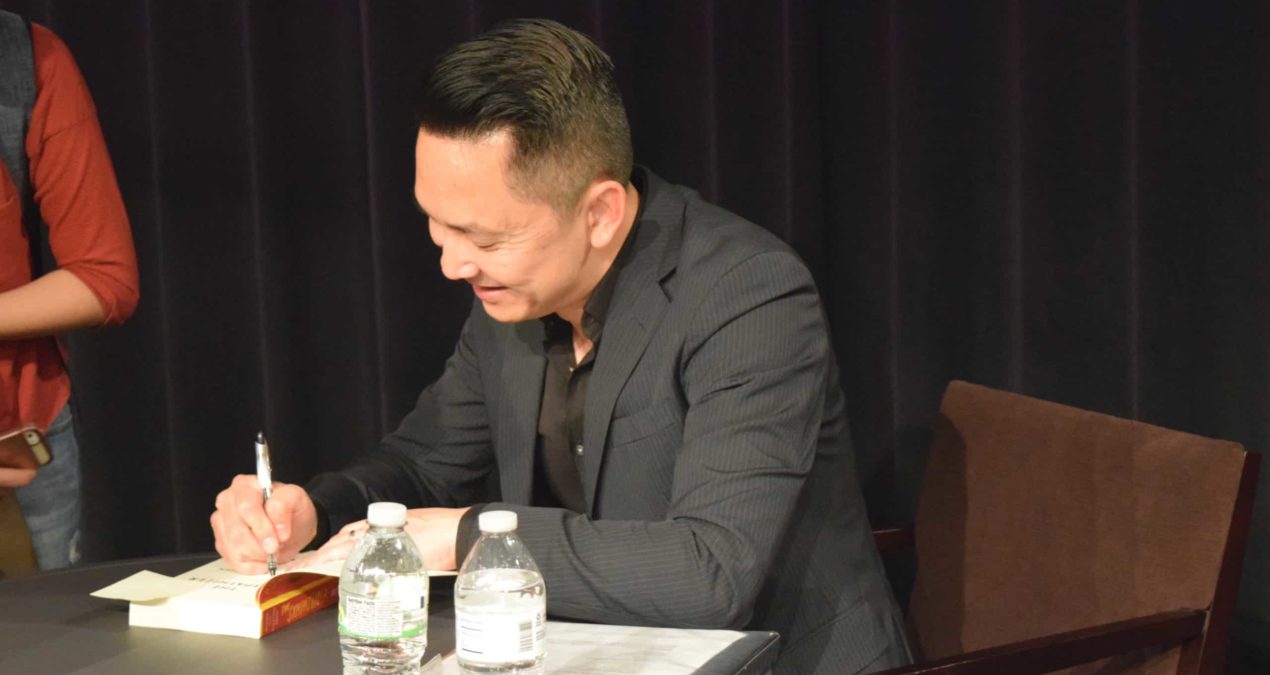 Denison alumni, students and faculty sat in the dim auditorium with their attention focused on a professional storyteller speaking to them from the stage.

Nguyen, the winner of the 2016 Pulitzer Prize for Fiction for his novel “The Sympathizer,” lectured to a sold-out auditorium at the Columbus Museum of Art. The event was sponsored by the Beck Lecture Series in partnership with The Thurber House, a literary center in Columbus. Associate professor of English Brenda Boyle hosted the night.

Nguyen is a professor of English and American Studies and Ethnicity at the University of Southern California. Nguyen read from his Pulitzer prize winning novel and his newly released collection of short stories, “The Refugees.”

Nguyen is the son of two Vietnamese refugees who fled to America after the Fall of Saigon in 1975. He grew up at a refugee camp in Pennsylvania.

During his lecture, he shared how being a refugee affects his identity. As a man who has inherited two countries with two histories of idealism, struggle and revolutions, he writes to make sense of how America and Vietnam perceive each other.

“I thought the talk was very informative in regards to the refugee crisis around the world over the last few years, even though he was discussing the Vietnam War era. We see the same [but also very different] types of political and social struggles today,” said Jay Burgin ’17, an anthropology/sociology major from Cincinnati, Ohio.

“The Sympathizer” reflects Nguyen’s life and grapples with the exploration of identity. In the novel, the narrator is a half-French, half-Vietnamese army captain who flees to Los Angeles after the Fall of Saigon. He lives with other Vietnamese refugees and secretly reports his American experiences back to communist authorities in Vietnam.

In between reading from his works, Nguyen shared personal stories. He continuously emphasized how storytelling is so powerful during the political climate today.

“Of course, as a refugee I’m concerned with empathy and inclusion. If people weren’t empathetic and inclusive to me, I wouldn’t be here. You wouldn’t have a Pulitzer Prize winner!” said Nguyen.

He read his work with animated facial expressions, unafraid to interrupt his reading. The audience appreciated his jokes, casualness and his insight on significant topics.

“He was really engaging and funny, but at the same time was speaking about themes super relevant to American politics right now,” said Molly Keisman ’19, a communication major from New York, N.Y.

Nguyen’s visit was a unique event for the Beck Series, as they usually take place on campus. There are two more events part of the spring series: poet Joanna Klink on Wed., Apr. 5 at 8 p.m. and associate professor of English Margot Singer on Thurs., Apr. 20 at 3 p.m.