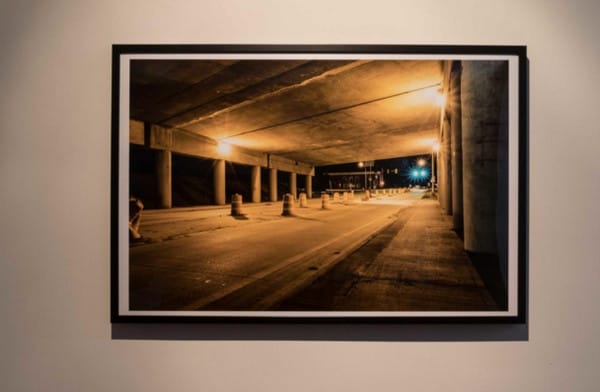 Vega led an audience filled with Denison students, alumni and faculty on a journey to answer the question: of “who is the man the art?”

Most interesting was the underlying theme of identity that inevitably presented itself throughout the course of the night’s presentation.

Truth lies in Vega’s phrase “location forms identity.” This powerful statement could be felt, lingering in the air by an audience with people from every corner of the world, and all walks of life.

Born and raised in Hermosa, a predominantly Hispanic blue collar community, in Northwest Chicago, Vega’s identity could be considered worlds apart from someone born in New York or London or India.

Vega decided to attend Denison to garner the fundamentals of starting a great career in the arts, eventually receiving a Bachelor of Fine Arts.

Attending Denison was not always easy for Vega, whose own upbringing and identity felt so different from other students at the university. Vega eloquently described such a feeling when he said “on the Hill I felt away from reality, but home helped bring me back.”

Even in his earliest work, Vega’s art was created with inspiration and emotion from his time spent in Chicago, who Vega a part of his identity and Denison who perhaps in a way, altered it.

Vega now serves as director of the Denison Art Space, where his current exhibition is on display. On his exhibition “Familiar Streets,” Vega had some important things to say.

“The photographs are dear to me because they capture a moment of reflection, and search for belonging and understanding in a new environment, as well as simultaneously preserving a part of history in Newark,” Vega said. “The inspiration of the show’s title, ‘Familiar Streets,’ comes from the familiarity that I have with constant change and relocation, as well as the connection I hope the community grasps to the areas shown.”

Vega expressed the idea that identity is ever-changing throughout one’s life due to different experiences, which is important to growing and learning.

He said he feels that in a world where it is common for people to hide their identities or their true selves to fit into a perceived image of what a person should be, one should instead embrace their identity and use it to create a meaningful life.

Sitting in the audience on Wednesday night, Shraddha Shankar ‘21 looked on to Vega speak on his use of identity in his art. Only a month ago, Shrakar moved from her hometown of Chennai, India to study at Denison

University. When asked about identity, Shrakar could not be more sure that “identity is something so likely to be hidden to fit into the mold of a place where you feel your identity doesn’t match others.”

At a university where people come from all over the world, Shrakar encourages students to “use their identities as a platform to provide a different view to a situation or to create something that speaks truth to others.”

In a world where many choose to hide their identity, Vega embraces his, using it to fuel his work. In the end, the results have been simply, beautiful.