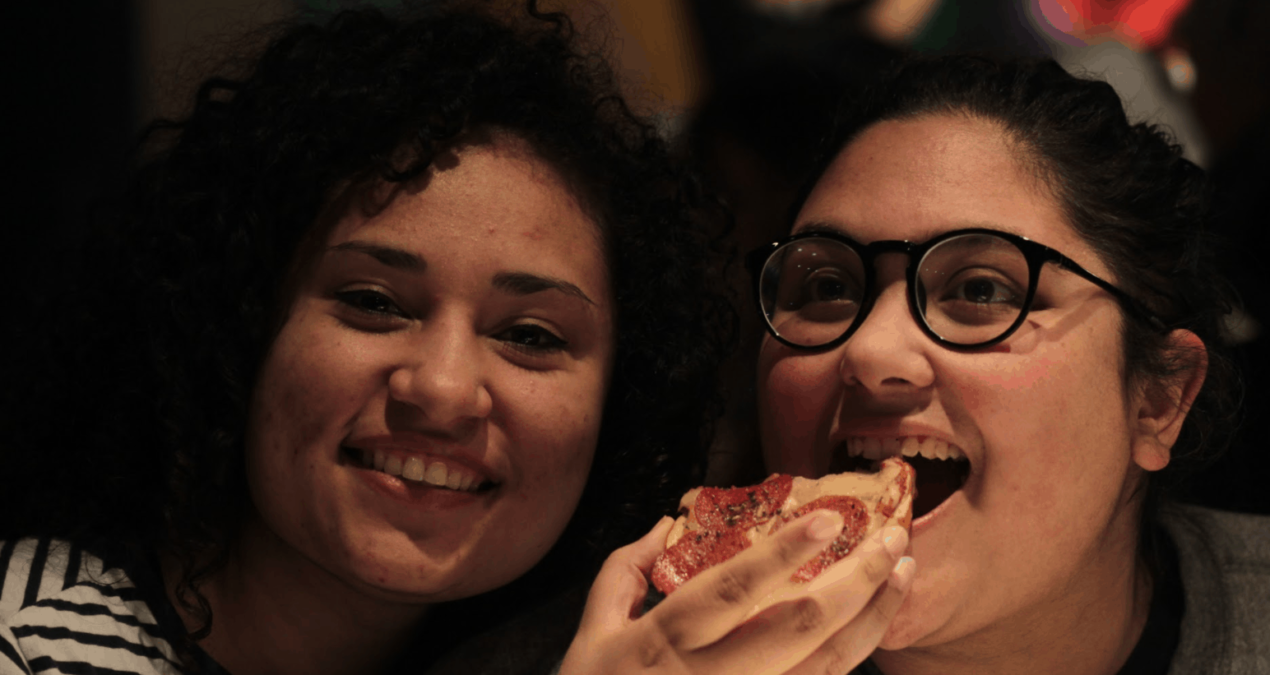 As students pass through East Quad on the weekend, the glowing windows of the Bandersnatch lure many in with the promise of friends, music and sweet treats. This past Thursday was no different, as students placed their orders and gathered on the couches and tabletop chairs.

Sipping their milkshakes, they watched as Sara Hartsock took the stage to introduce a night of entertainment near and dear to her heart: a stand up comedy open mic night.

Following her studies with the Women and Gender studies department, Sara decided to host the event as part of her senior research. A member of the burpees and a self proclaimed feminist, Hartsock has long since been a fan of performance art.

With the open mic night, she decided to add a twist of activism, by focusing on the idea of silence where there should be voice. Hartsock describe the recurring theme of “people having important experiences, but keeping them to themselves” as part of her inspiration, and hoped the night would allow for a bit of “public cathartic venting.”

Certainly, the speakers of the night took the stage by storm, with topics ranging from a dislike of soup to the trials and tribulations of learning to flirt. The Snatch was full of laughter and applause late into the night, as each individual shared witticisms and wonderings with the crowd.

Of his performance, Nick Staniszewski ‘19 said, “I thought it went well. However, none of my friends think it’s a good idea for me to drop out of Denison to pursue this as a career.” Maggie Chamberlain echoed this sentiment, adding that she “…liked that the event was so well attended and enjoyed the fact that a lot of people participated in the open mic part. It was fun to see some people I wouldn’t expect get up there and tell some stories.”

Also a junior, Chamberlain explained that she got involved because she loved to write and perform comedy, but didn’t have experience on stage.

Says Chamberlain, “I mainly wanted to get involved so that I could get practice performing some jokes in front of an audience of people I’m familiar and comfortable with to see what jokes work and what don’t.” The laughter her routine provoked indicates she’s on the right track.

Others, such as Katie Woods ‘20, a creative writing major also pursuing a narrative nonfiction concentration, weren’t strangers to the stage. Woods used to do stand up in Columbus and jumped at the chance to hone her act locally. Additionally notable performers included Kateri Jameson ‘19, Connor Scott ‘19 and Lily Anderson ‘21.

A place that many make the trek to for a late night snack, the Bandersnatch has recently begun to add community events to their calendar. Stop by this coming Tuesday for a special Valentine’s performance from the Hilltoppers!

The Way Way Back