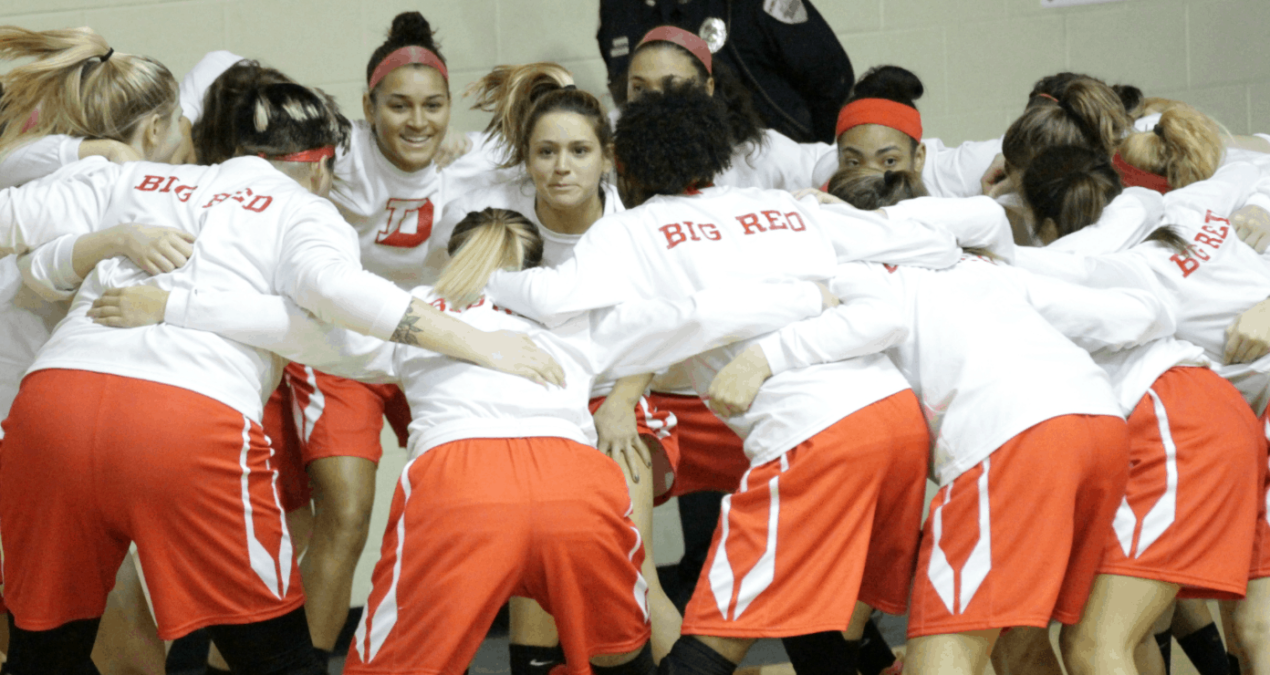 TEDDY AUMAN — As the final seconds ticked down, Denison Women’s basketball capitalized its season with a win.

The Big Red defended the home court in a gripping performance at last Wednesday’s game against Hiram to improve their regular season record to 12-14 (7-9 NCAC).

After a close first half, Denison picked up pace on Hiram to bring a final score of 77-52 in favor of the Big Red.

During a close first two quarters, Denison’s true talent on both sides of ball was evident. Their up tempo offensive attack and strangling defensive pressure gave them the boost they needed in the second half. Hiram was able to keep a competitive stance with the big red for the first half. As the second half began, the Big Red came back onto the court on fire, displaying dominance on the defenseless Hiram.

With a fast paced and competitive first half, Lauren Longbrake 20’ and Alison Schafer 20’ carried the team on the offensive side. After consecutive jump shots by Longbrake, and several free throws and 3 pointers by Schafer, the Big Red still struggled to stay atop of Hiram, producing a 15-15 score pulling into the end of the 1st quarter. This highly competitive game continued into the second quarter, Big Red heading back into the locker room with a leg up on Hiram 28-26.

“I think we just came in at half time and knew that we had to pick up our pressure on Hiram and play like the dominant Denison team we were known for all season”, said Lauren Longbrake on their performance in the second half. This pressure was sure noticed as they lead the Terriers 50-42 at the end of the second half, and never looked back from their finishing with 72-55 final score on the board.

Longbrake looked back and reflected on what was somewhat of a disappointing season for the Big Red.

“I think everyone expected us to be good, but we are a really young team, I think what ever happened, people would be happy with, but I know we hold ourselves to a higher standard”, said Longbrake.

After a 2-0 start the Big Red went 4-3 in the opening month of November. Over the course of the December and January, the Big Red struggled, and come up with just 5 wins.

The win hungry Big Red completed the month of February with only one loss.

With a strong finish in the last month of play, the question around next years team is brought to the podium.

“We only have one senior graduating, so the whole core group will remain on the court. We are all gonna work hard to get better, and be a force to be reckoned with as a team”, said Longbrake, who demonstrated excellence on both sides the ball,

After this final regular season game victory against Hiram, the Big Red were invited to participate in the NCAC quarterfinals. The game took place on February 20th, against the third ranked Oberlin Women’s basketball team. Unfortunately for Denison, Oberlin proved too strong for the Big Red, resulting in a first round elimination.