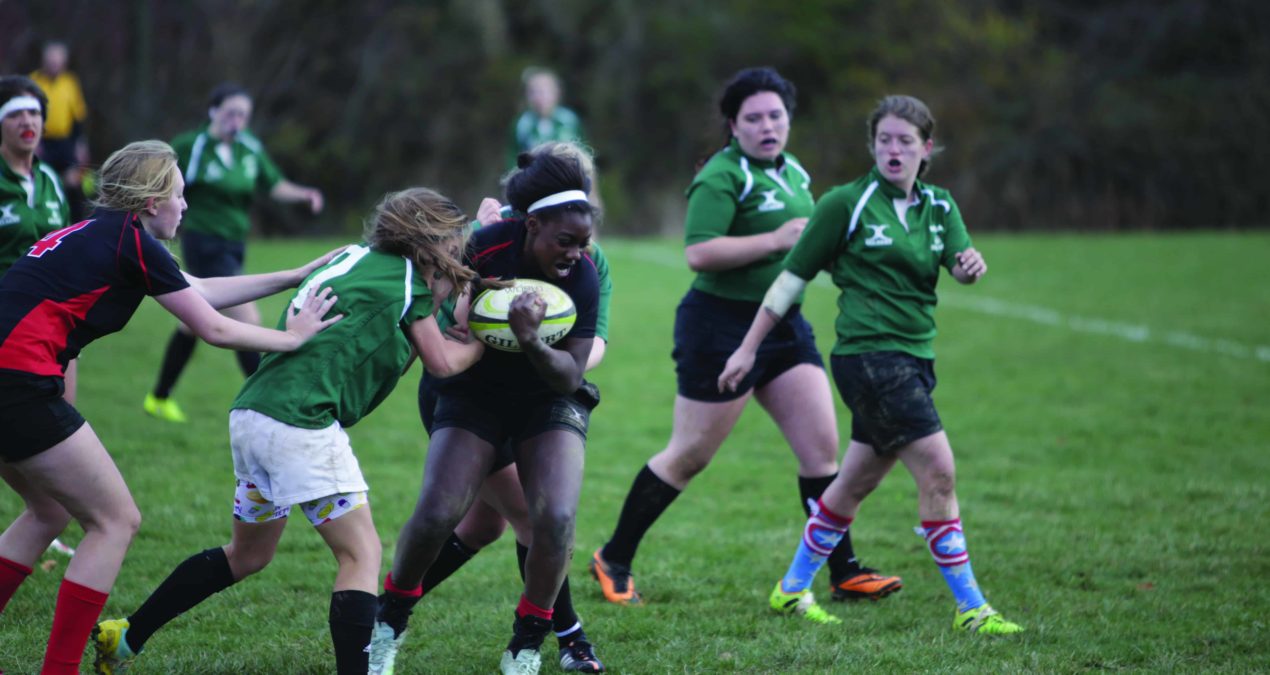 By Neil Riley and Owen Smith

Laine Schwarberg ‘16 stormed down the field late in the match against Findlay. She dodged and juked, but could not avoid the Findlay defender who met her like a brick wall. Her teammates gathered behind her limp body, retrieving the loose ball.

They pitched the ball from one person to the next and eventually found the team’s speedy back, Mayra Torres ‘19. Torres crossed the zone line in a blaze of speed for the try, sending the Big Red to the regional championships in Allegheny, N.Y.

“I was just getting up, and I was still really flimsy from the tackle and realized she scored,” Schwarberg, the captain, said. “I turned around one of my teammates and she was so excited she ran across the field and jumped into my arms and I was on my back again.”

The 30-17 score marked another win over schools in the small college division. The DU Women’s Rugby club has remained undefeated in the division this season.

Callie Pace ‘18, a fly half for the club, noted that the club started slow against the Findlay Oilers.

“We started off a bit slow, but once we got into it we knew what the stakes were so by the end our coach was like guys this is a really important game,” Pace said. “You have to work your hardest; you have to come together as a team.”

Pace was especially proud of the way the club managed to spread the scoring evenly and appreciated the captains’ efforts.

“Our captains are really great. They are always really helpful and they have strong leadership skills,” Pace said. “But I think there’s also leadership from the rest of the players everyone has their strengths so it really comes together as a cohesive team.”

In rugby, defense transitions to offense in a flash. When the women have to run up and down the field, tackling the other team at every opportunity, it is really easy to grow winded, tired and beat down throughout the game.

“We just need to stay healthy,” Pace said. “We need to stay motivated. I think that this needs to be one of our top priorities because it’s such an important tournament.”

“We have such a great team this year I think we could take it the whole way.”

DU women’s rugby returns to action in the regional championships against St. Bonaventure.