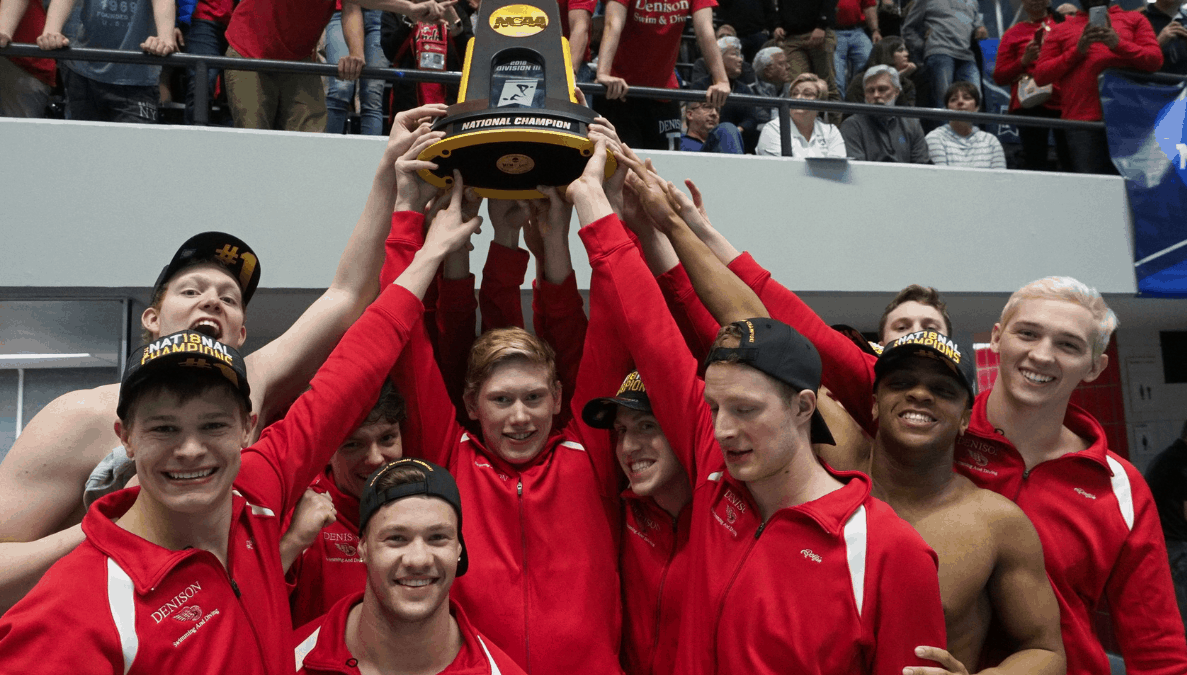 The Denison Men’s Swimming and Diving team spent spring break soaking in golden rays and wading in mn clear water, but not in the same way as those who visited Florida.

Instead, the team’s golden rays came in the form of a championship trophy as they won 2018 NCAA Division III National Championship at IU Natatorium- the fourth in the program’s history and the fifth title win overall combined with the women’s team.

But it was a long week before the teams could celebrate. So close to their goal, the team felt it was imperative to keep their mindset positive.

“The hardest part of going into this championship was to remain focused on our goals even while many other distractions were be going on. The win was very rewarding for the team as all of the hard work we have put in this year showed as many people swam times they didn’t think were possible.  For some team members to have breakout swims after feeling that they had underperformed last year, made this year’s team victory worth much more than just the score at the end of the meet,” said swimmer Matt Hedman ‘19.

Hedman finished second in the 1,650 freestyle and cut his personal best time by 10.64 seconds, which swimming experts will tell you is an impressive feat.

“We didn’t put any pressure on ourselves, we just focused on swimming fast and having fun because that was within our own control,” said Hedman.

The tenacious spirit of the men’s team led the competitors to take home first place. Big Red beat second place Emory by a whopping 227 points, ending with a total of 596.5 points for the team.

“Our focus throughout the season and at championships was on swimming our own races and not getting caught up on what other teams and swimmers were doing,” said Coach Gregg Parini, the coach of both the men and women teams.

Sophomore Bebe Wang had the comeback of the tournament, as he overtook the frontrunners within the last 50 yards of his 300 backstroke race to edge out a win.

“I wasn’t really focused on winning before the race, I was more focused on swimming my own race. I knew the people around me were going to go out fast in the first half of the race, so I had to bide my time and wait to make my move. I knew I was catching up to them and when I saw them out of the corner of my eye on the last turn, I just put my head down, or as much as you can on backstroke, and got my hand on the wall first. When I saw the number 1 on the board, I totally lost it. It was just the most incredible experience, and Jason Wesseling, a senior on the team was racing next to me and came over to my lane and we both went wild. We had been pushing each other in practice all season and to see the work pay off in the pool is the most rewarding feeling,” said Wang.

When the members of the team finished a race or accepted their trophy, many held up their arms over their head and connected their hands, in a circle formation. However, this seemingly unimportant move has a deep meaning to the team.

“It’s a ring that we put up after our races, and it symbolizes the bonds that we have and support that we give to each other. We spend a lot of time together training and putting in work, way too early in the morning and late at night, and when you put up the ring, it lets your teammates know that your fast swims and successes could not have been possible without all of them by your side pushing you during practice day in and day out,” said Wang.

The women’s team came in fourth place at the tournament, losing by only 27 points to third place Williams.  This was the 11th consecutive top-four national finish for the team who walked away from the championships this year with a remarkable 25 All-American performances and two event national championships.

KT Kustritz ‘20 made a statement with her performance as she won the 200 breaststroke with a meet-record time of 2:12.27, which beat her own varsity record by 2.06 seconds. But that wasn’t good enough for Kustritz. The next day she became the Division III first female to complete the 100 breaststroke in under a minute, with a time of 59.77 seconds.

Kustritz ended the meet with the maximum seven All-American swims, highlighted by the two victories and a runner-up finish in the 200 IM.

“KT entered rarified air for a small college athlete by being the first woman to ever eclipse the one minute barrier in the 100 breaststroke.  Her time would have beaten the 8th place finisher at Division 1 nationals championships. The challenge for KT, as well as our other swimmers, will be to continue to improve and drop times.  She is still learning how to race and how to apply her considerable talents to her races. It should be quite exciting,” said Parini.

After such a big season for both teams, it may be unclear what direction to take in the upcoming years. However, Coach Parini only looks on the future in positive light.

“Moving forward, our focus will be on improving each of our swims … maximizing the training and competitive opportunities that the season presents,” said Parini. “The challenge will be to train harder and smarter in order to elicit bigger time improvements.”

Overall, both teams are expected to celebrate their accomplishments for the next few months. However, the team will tell you that this season will only serve to benefit the team as they look toward.

“The team had its ups and downs during the season, but we came out of it better and stronger as a team. As we prepare, we’re not going to let our championship win this year affect how we train. Next year will be a completely different team with new people and new goals, and if we want to perform again, we can’t let this year’s win get to our heads. A lot of people have been stepping up this year, including my fellow sophomores Francis Biagioli, Mitch Williams, Kymani Senior, James Baker, the list goes on. We will continue to step up and lead the team to greater heights. I’m really excited about next season, I can’t wait for it,” said Wang.

A celebration for the team was held in Knobel Hall on Thursday, March 29. The Denison Swimming and Diving Teams will be working off season until the start of the 2018-2019 season this fall.