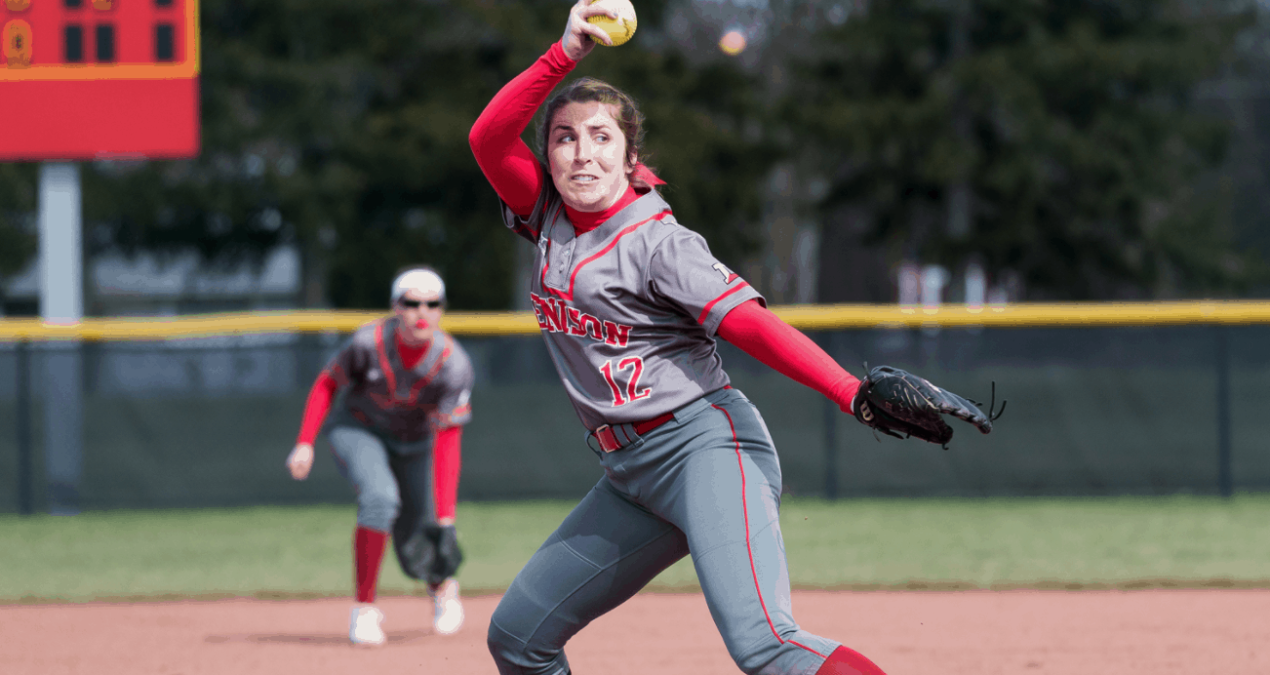 This past week, the Big Red Women’s Softball team won five out of their six games in three scheduled doubleheaders against Kenyon College, Oberlin University and most recently Thomas Moore University.

Entering Sunday’s matchup with Thomas Moore, the Big Red were winners of five straight and looked to defend their home field in a dominant performance against the Saints of Thomas Moore.

After a cold and snowy night, the Denison Big Red took the frozen field in a double header against the Thomas Moore University Saints. They looked to continue their hot five game win streak against the Saints (11-11).

After four innings of play, the score remained 0-0 with both defenses eager to score.

A victory on the brain, the Big Red stormed back onto the field with a clear objective of overcoming the Saint’s heat. The Big Red were not quite ready for the final offensive push lifted by the Saints as the final scoreboard read 1-0 in Thomas Moore’s favor, ending the Big Red’s five game win streak.

The Big Red gathered themselves and were determined to reclaim and defend their field. Denison’s suffocating defense and power on the plate really opened up the field for the Big Red to take control of the ball.

“Our energy in and out of the dugout can be seen in every one of our players. When our offense is on, it’s very hard to slow us down,” said first baseman Brennah Dutcher ‘20, a biology major from Alexandria, Kentucky.

With a fast paced and competitive first couple of innings, Lauren Secaras and Lindsey Clemson carried the team offensively. With a home run for each, the fourth inning read 7-4 as the Big Read pulled ahead and never looked back.

As they returned to the field for the final inning, much was up in the air for the Big Red as to whether they could finish out this dominant victory or not. This question was answered as the Big Red delivered four runs to finish out the game 12-4 in Denison’s favor.

“I think the games against Thomas More were very telling as to what our team is capable of. We were able to keep that first game so close and come together in the second game to not only win, but slaughter them in 5 innings. We work so hard in practice and it’s nice to see our dedication and hard work pay off against a solid team,” said left fielder Laura Bagan ‘19, a psychology and communication double major from Winnetka, Illinois.

With a draw among the two game double header, the Big Red claim a record of 11-5 headed into the mid season. The season began with a pair of cancelled matches, but was followed by several winning and streaks which kept the defense and offense boiling.

As there are still many games ahead, the Big Red look to leave a lasting mark on the competition in order to secure a spot in the NCAC tournament.

The Big Red have a doubleheader coming up this Thursday at 5 p.m. and 7 p.m. against Mt. St. Joseph at home and are hoping to keep the intensity up and continue the winning streak.