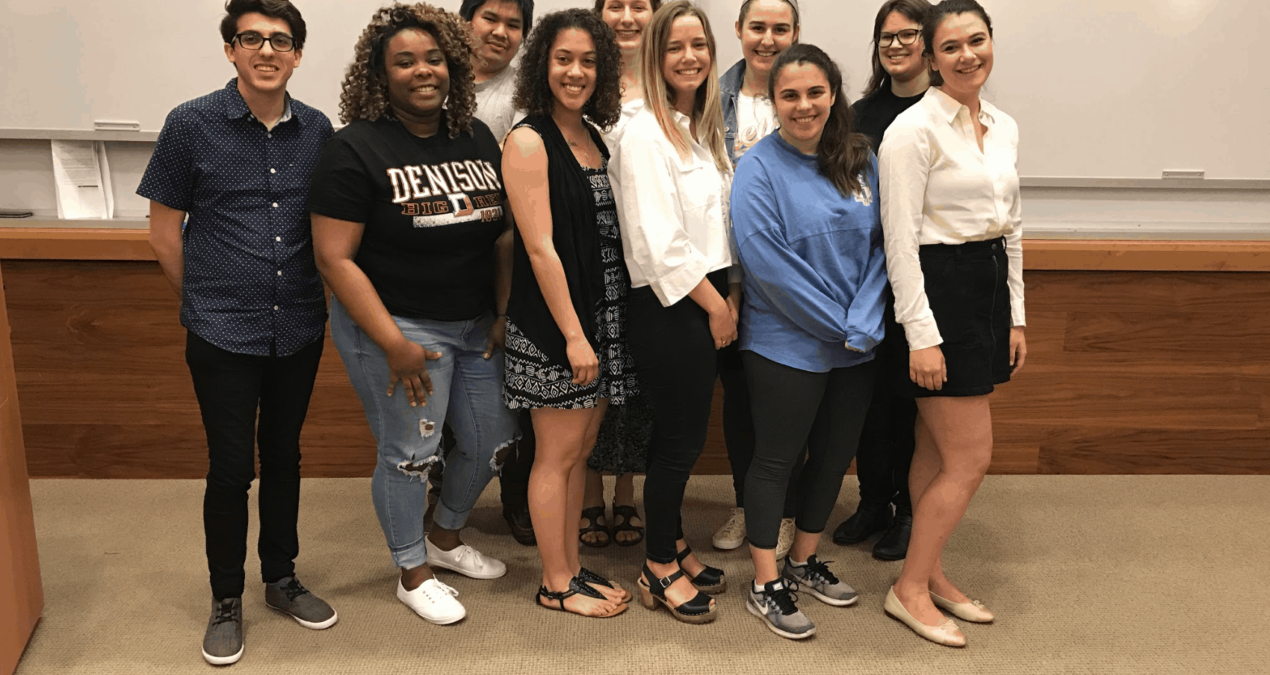 The academic year is coming to a close, and for some seniors this means the end of months, semesters and even summers of intensive research.

At the presentation held this past Thursday, each researcher was given three minutes to present their work to a small crowd of faculty, students and administrators. They were directed to discuss what their research was about, what department they represented, their motives for researching the topic of their choice and any post-graduate plans they may have.

Titled, “The Life of Objects: Mapping Issues of Repatriation in Oceania,” art history and visual culture major Grace Martin ‘18 explored why objects in museums should go back to where they came from and how the placement of these objects replaces their true meaning. By creating a digital map of these objects, she is giving them more life through tracking their movements, both in space and time.

Breonna Grant ‘18, an English and education double major described her education research involving alternative curriculums, where she gained first-hand experience working and observing students in low income communities. She discovered the importance of cultural-based curriculums that may implement rap music into students’ learning. Next year, she plans to attend the University of Mississippi School of Law.

Senior Rachel Epstein looked at shifts in educational policy in Britain, more specifically how their education policy was formulated without consulting minority communities. She focused on how the youth were particularly affected by this in the long run, and how this certain economic ideology assumes that every child has equal opportunity. Through this, she unpacked the disconnect between the government and social systems of education.

Jennifer Fajardo Ruiz ‘18, an anthropology/sociology and education double major researched literacy in Central Ohio by working with students from marginalized backgrounds and observing their primarily negative schooling experiences. She discovered that students are affected by their social backgrounds and that they feel their teachers are not meeting educational needs specific to their learning styles.

Chengyuan Guo ‘18, a political theology major investigated the spiritual nature of Black prisoners in his research titled, “THE CRUCIFIED GOD: Covenant, Liberation and the Hope of the Incarcerated Masses.” After graduation, he plans to attend Yale University.

Harrison Ponce ‘18, a chemistry and music performance double major, kicked-off the celebration with a brief overview of his work titled, “Local Dynamics of Polyisobutylene in Solution: An All-Atom Molecular Dynamics Study,” where he worked with molecules’ physical properties and polymers that have an unusual combination of properties.

Juniors Amanda Walsh and Rachel Reardon, both biology majors with minors in chemistry, partnered up and studied yeast cells to track cellular memory that is passed down from generation to generation. They plan to continue this research throughout both of their senior years.

Daniel Timmins ‘19 explained his study abroad experience in Australia, where he crafted a trap that caught a certain species of Dengue transmitting mosquitoes alive, which has never been done before. He, alongside a group of many other scientists, are now able to test these mosquitoes and are looking to stop the transmission of dengue.

Hannah Glick, a senior biochemistry major explained her summer research experience, where she studied supramolecular interactions of molecules. Her curiosities in stimuli responsive supramolecular assemblies and polymers fueled her research. Post-grad, she plans to attend the University of Michigan Medical School.

The youngest researcher there, Angela Sommerer ‘20, worked with early star formations in her research titled, “Protoplanetary Nurseries: Identifying Gaps in Circumstellar Disks,” where she found and measured gaps in planetary discs.

Moe Thu ‘18 worked in the international studies department and studied the political economy of development in Myanmar. He examined undeveloped vs. developed countries, ethnic minorities and varying systems of access among Myanmarian people. Post-grad, he plans to work as a research intern at the University of Pennsylvania.

Senior Barkin Cihanli combined economics and history together in his research of the history of Egypt, where he explored food sovereignty in Egypt. Through his research, he explains how Egypt wasn’t self-sufficient in food production, making it unable to feed its own population. Therefore, they had to import food, which accumulated loads of debt and caused riots among Egyptian people.

Titled, “Financing Sustainability: An Ecological Approach to Resilience and Decentralized Decision-Making,” senior Anadita Gupta focused on how we should finance sustainability and how we need a decentralized system to help understand a sustainable environment. She centered her research on the interdependence of environmental and economic systems, and what sustainability means in the long term.

Ivanna Salgado ‘18 read her creative story of her father’s travels from crossing the border into the U.S., where he was involved in a car accident. His story inspired her to research the Tijuana, Mexico metropolitan area where he was hospitalized.

Senior English major Madeline Bellman studied theatrical translation through a case study of Alejandro Casona’s Spanish written plays. She centralized her research on the effects of translation, specifically how the cultural highway that exists between Spain and France doesn’t seem to exist between the U.S. and Spain.