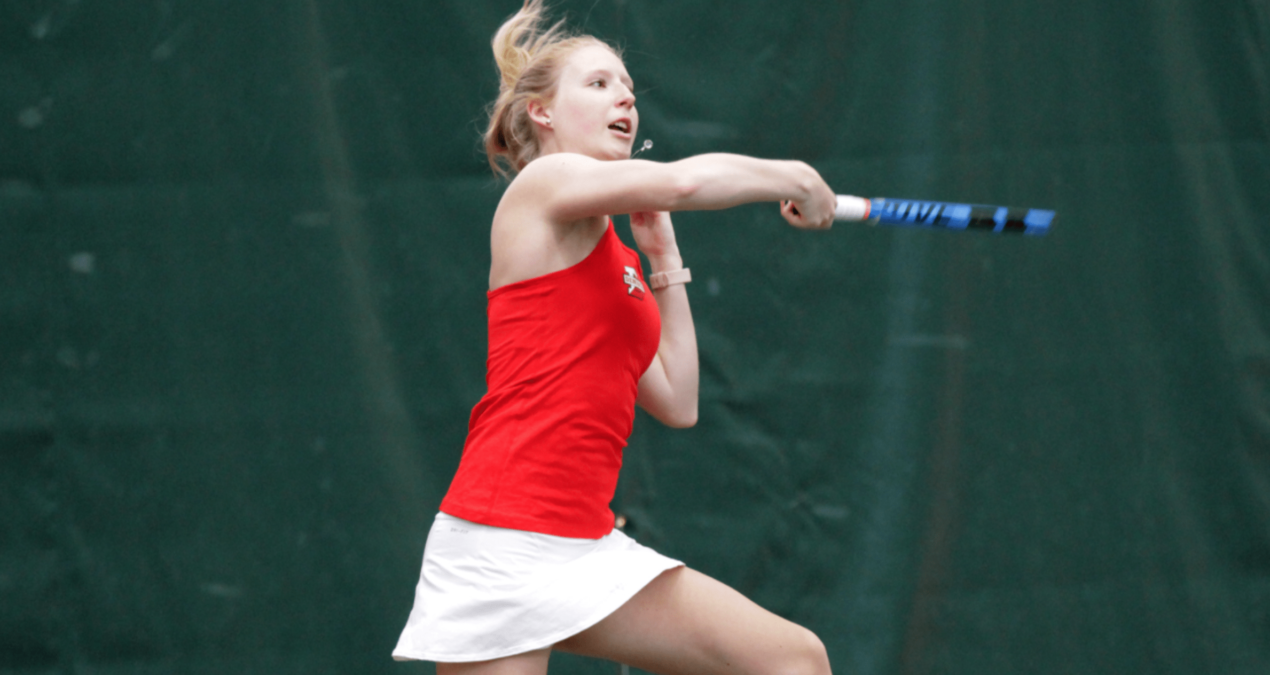 MAX CURTIN & JOEY SEMEL — Our rivals got the best of us this time around.

Both the Men’s and Women’s Tennis teams entered the NCAC Tournament as the #2 overall seeds in their respective draws. Each tournament was held in Indianapolis, Indiana at the Barbara S. Wynne Tennis Center and featured the NCAC’s top eight teams going head-to-head in single-elimination format.

The Men’s team entered tournament play with an impressive record of 11-4, including four consecutive conference victories to close out the regular season. Despite the high quality of competition across the NCAC, the Big Red squad was confident that they would have another shot at knocking off Kenyon in the finals as long as they could take care of business in the first two rounds.

And they did just that. With decisive victories over Wooster and Oberlin on Friday and Saturday (5-0 over Wooster and 5-1 over Oberlin), the Big Red clinched an opportunity to compete for the NCAC Championship against none other than their rivals from Kenyon College.

The Big Red hit the courts Sunday with something to prove after falling short to Kenyon 9-0 in Gambier, Ohio earlier in the season.

Mitchell Thai ‘21 has been a major contributor to the team’s success all season in his first season with the Big Red, and shares that the team had geared themselves up for what they were sure would be a “very tough battle”.

They gave Kenyon everything they could handle and then some during the doubles portion of the championship battle. After Kevin Brown ‘19 and Blake Burstein ‘19 came up just short in #1 doubles, losing 8-6, the attention turned to two incredible matches in #2 and #3 doubles.

Both matches went down to the wire in tiebreaks, each decided by a final score of 9-8 (9-7). While Vlad Rotnov ‘21 and his partner, Brian Weisberg ‘21 were triumphant at #3 doubles, Thai ‘21 and captain Jamie McDonald ‘18 were unable secure the victory at #2 doubles.

Thai ‘21 remarks after the fact that the match “definitely could have gone either way.” He adds, “We all wanted to win not only for ourselves but in honor of our lone senior Jamie McDonald. I can say without a doubt he is one of the hardest working and most competitive people I’ve ever met.”

The women’s team took a similar path to that of the men.

Then, on Saturday, the match was closer, but the Big Red still came out on top. They managed to eek out a 5-3 win over Oberlin. That one featured a dominant 8-2 win from the doubles tandem of Lauren Hawley ‘19 and Emma Alsup ‘19.

However, on Sunday, the luck ran out. The Big Red fell 5-0 against #22 Kenyon. It wasn’t all negative however, as the match really produced a special atmosphere.

Hawley ‘19 remarks, “The energy is always super high when we play Kenyon but it was especially high in the championship. But while energy was much higher than other matches, so was the pressure. We played pretty well against them in the regular season so we knew it would be a good match and that there was a possibility that we could come out on top.”

Now that the regular season is over, the attention shifts to a possible NCAA Tournament bid, as well as next season. After the NCAA Tournament, the team is only losing one senior, and retains their top ranked player in Hawley.

“We do have a couple of freshmen coming in next year and it will be very interesting to see how they impact the team but I think that they’re going to be a great addition. What will be really interesting though is that there will be six seniors next year, including myself. I think we all have different but important roles on the team so it’ll be very interesting to see how it all comes together next season and who will be named captains and who will be the stand-out leaders of the team,” said Hawley.

Both the Men’s and Women’s Tennis teams are bringing back extremely talented core groups of players next season and will look to be in contention for the NCAC title once again.