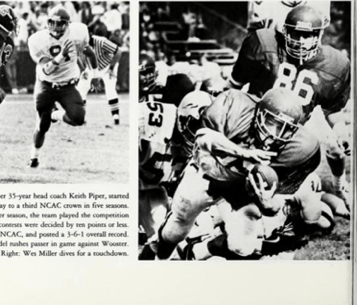 CARTER HALL — Growing up just ten minutes east of campus, I’ve had the chance to meet and get to know many Denison alumni who live and work in Newark.

Learning about what Denison has offered past students allows a better look at how far we’ve already come and how much potential there is for the future.

Wes Miller graduated in the class of 1991 and was an English and religion double-major. He was a teaching assistant for Dr. David Woodyard, who is still in Denison’s  Religion Department today. One of the changes to campus since Wes left was the adding of the turf football field. The addition of the football field is significant to Miller because he played wide-receiver for the Big Red while he was at Denison. According to some old editions of The Denisonian, he averaged over 70 rushing yards per game one season at tailback for the Big Red, with an average of more than 6 yards per carry.

When asked about his fondest memories on campus, Miller said “Going to sorority formals with the lovely, dark-haired cheerleader who would become my wife, going to war with my football brothers on bright, crisp Saturday afternoons, hearing Coach Piper growl that we have to get “Tougher!!”, getting “lost” perusing the stacks at the library, watching reruns of Magnum P.I. with [friends] Strausi and Tender when I should have been working on homework or papers at 1 A.M. and ordering a Moore’s pizza after the midnight hour.”

Miller went on to earn a master’s degree in English Literature and has been an English teacher at his alma mater, Licking Valley High School, for the last twenty-two years. He has two children, Luke and Kendall, who are juniors at the same school. He has been married for almost twenty-four years.

Johann Klein graduated in 1997 and double majored in political science and Spanish. Johann was a part of the last class to live in the fraternity houses. Johann had advice for both freshmen and seniors.

He advised freshman, “Try to do well academically, because you don’t want your GPA to be so low that it is hard to bring back up. While no one looks at your college GPA later in life, with your first job, internship, or graduate school, it does have an impact. You can have fun and study. You don’t have to camp out in the library, but you do need to study.”

He urged seniors to try to get campus jobs and internships that give you real workplace experience. Johann now works in governmental affairs, and just recently left the Ohio Department of Transportation, where he was the Deputy Director of Legislative Affairs, and Jobs & Commerce.

Shane Hancock graduated from Denison in 2003 with a biology major and a French and chemistry double minor. Shane noted how much Slayter has changed since his time at Denison, namely with the addition of the parking garage. Some of his fondest memories were extensive study group sessions in Slayter, where they frequented the Pizza Hut and Taco Bell that used to be there. Shane was also a part of the small minority of local students who commuted to campus.

Hancock shares some advice for current students: “I wish I had brought a higher level of maturity to my education. There’s no doubt I had a great education, but I wished I had approached school with less of a get an A in the class mentality, and more of a learning the content mentality. Grades will always remain important, but they don’t supersede the importance of learning,” he said.

Hancock now is now teaching chemistry nearby at Licking Valley High School. He is also a licensed minister and youth bishop at Christian Apostolic Church in Newark.

While Denison has its share of famous alumni, the everyday people who are  impacting communities are often overlooked.

Every Denison alumni I have met have earned my respect because of their outstanding character, work ethic, passion for learning and kindness. These are the kind of alumni we should all hope to be.