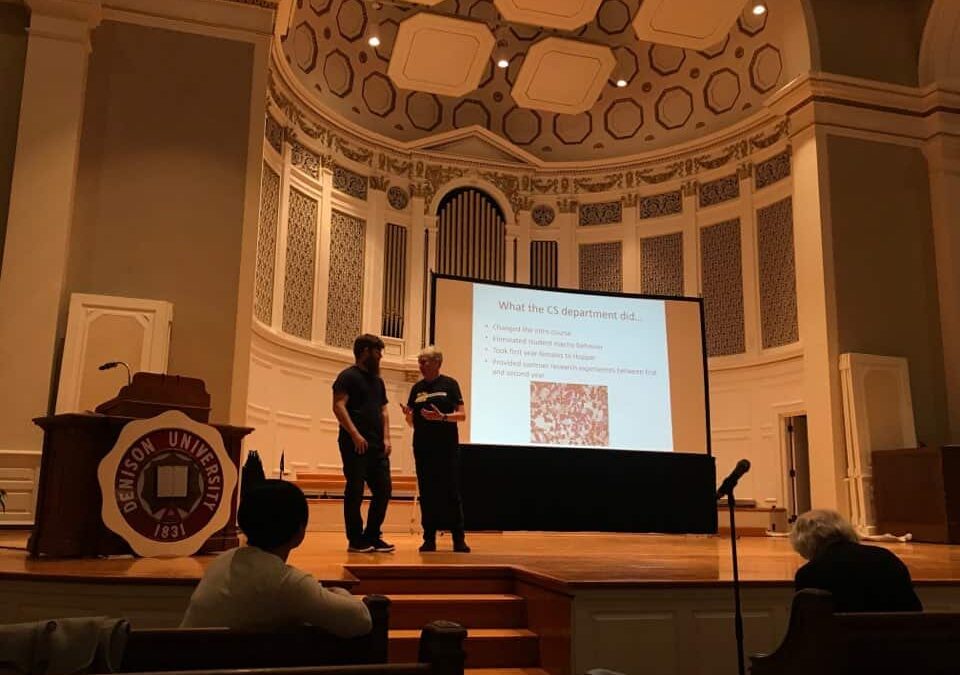 JAEEUN LEE — Dr. Maria Klawe who is the president of Harvey Mudd College came to Denison last Thursday night to give a talk about ‘how to diversify the computer science community throughout the world.’

Smaller than Denison’s student population, Harvey Mudd is a tiny liberal arts college of science and engineering consisted of 831 students.

Following the humorous introduction given by Dr. Mei from department of Math and Computer Science, Dr. Klawe, wearing a Harvey Mudd t-shirt, came up the stage and gave her Anderson Talk with enthusiasm.

She has committed herself to broaden the diversity in STEM fields and improve K-12 science and mathematics education to give more chance to women and people of color in an area that lacks diversity.

She said that by only changing job advertisements, interview processes, and the recruiting of women engineers, the applicants of women can be significantly increased.

Changing the culture is not difficult, but it takes persistence and needs to be done by the community opposed to just individuals.

As the president of Harvey Mudd, Dr. Klawe takes risks and does things that are different from others.

As a female mathematician, Dr. Klawe didn’t want to ask for assistance from people because she did not want to make them think that she was worse in math than her male counterparts.  She emphasized to “practice things that you are bad at.”

Gender is easy but races aren’t. Percentage inclines toward their jobs after graduation with the interest in STEM from Harvey Mudd, half of the students are females.

However, people of color don’t tend to sustain their interest in STEM after they graduate. In order to bring more people of color into the college, she claimed that we need to make our education more appealing and to be willing to accept students from different backgrounds.

One of things that computer science department in Harvey mudd did was change the intro course of computer science and provide students a creative, team-based, problem-solving computation intro class. Not only in the college level but K-12 computer science courses can also be more fun and entertaining by making students interested in the subject.

Diversifying faculty by giving them an equal chance in recruitment and application also helps to reach Dr. Klawe’s goal.

Prominent scientists who aim to elevate the general understanding of science and mathematics are invited to campus and give lectures about their research or activity.

Graduating with A.B. degree in engineering science, Mr. Anderson was a member of Denisons Board of Trustees from 1983-1987. The goal of the program is to strengthen the science education at Denison.

The program also aims to offer students hands-on experiences in science by the Anderson Science Scholarships, and the Anderson Summer Research Assistantships in the Sciences.

Mrs. Anderson who actively engaged in the Reid and Polly Anderson Endowment also dedicated herself in the establishment of Polly Anderson Field Station at the Biological Reserve, which contains a classroom and laboratory to students in Biology, Environmental Studies, and Astronomy.