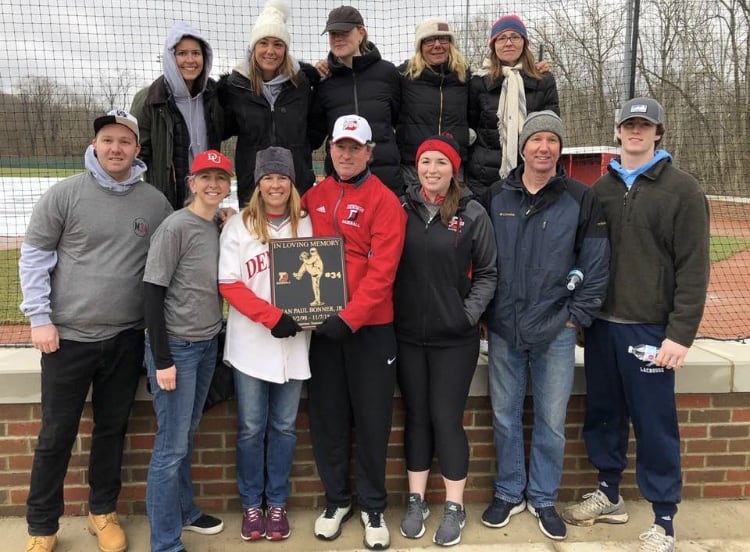 Mission34: An advocacy group in memory of Sean Bonner ‘20

JAX PREYER— Friends, teammates, and peers of Sean Bonner are coming together to commemorate his life on Denison’s campus and redefine the way Denison students view and talk about mental health issues.

Sean Bonner, of Charlotte, North Carolina, passed away on November 7th, 2018 after a difficult battle with mental health issues. Sean was a member of the class of 2020 as well as a pitcher on the baseball team and was cherished by the Denison community.

Mission34 was founded by Peter Pittroff ‘20 in memory of Bonner. The number “34” serves as a nod to Bonner’s baseball jersey number, with the tagline: “A New Type of Tough.” The group’s aim is “to shift the stigma and foster a better understanding of mental health,” writes Pittroff. Despite still being in its early stages of development, Mission34 has taken a running start. The group tabled in Slayter Union for the week leading up to a commemorative baseball game, memorial plaque setting and campus walk to foster a sense of community. The group also sold out of “Mission34” t-shirts within their first week of sales and is currently working out the logistics to make them available for purchase online. All money raised will be donated to the American Foundation for suicide prevention. Other instrumental figures in the development of the group are Brad Baldinger ‘20, Vince Walker ‘20, Grady Paine ‘19 and Coach Adam Stewart of the Denison Men’s lacrosse team. The Bonner family has also been heavily involved in the process.

Pittroff, a Charlotte native, had known Sean prior to coming to Denison as the two attended rival high schools and lived in the same neighborhood. After attending Bonner’s memorial service in Charlotte, Pittroff says he was inspired to do something to make an impact on Denison students’ relationships with their own mental health.

“His [Bonner’s] dad said something that really stuck out to me which was ‘Sean is the type of guy that can bring people together.’ Sean touched the lives of so many people, and I was lucky enough to have known him during his time growing up, and at Denison. Being able to bring these two communities together to both celebrate his life and raise awareness for mental health is very powerful,” said Pittroff.

When asked about how he sees Mission34 progressing, Pittroff wrote,

“Mission34 is raw and evolving. I think our main goal right now is to continue to build a presence, and to get as many people excited about what we have going on as possible. Mental health is a huge issue both on college campuses and our society as a whole. We believe M34 has the power to spread beyond Denison and we are hopeful to get as many people involved as possible”. To learn more about how to keep up with and support Mission34, follow them on Instagram @Mission34SPB.

OneTwentySeven: Partisan polarization on campus too?