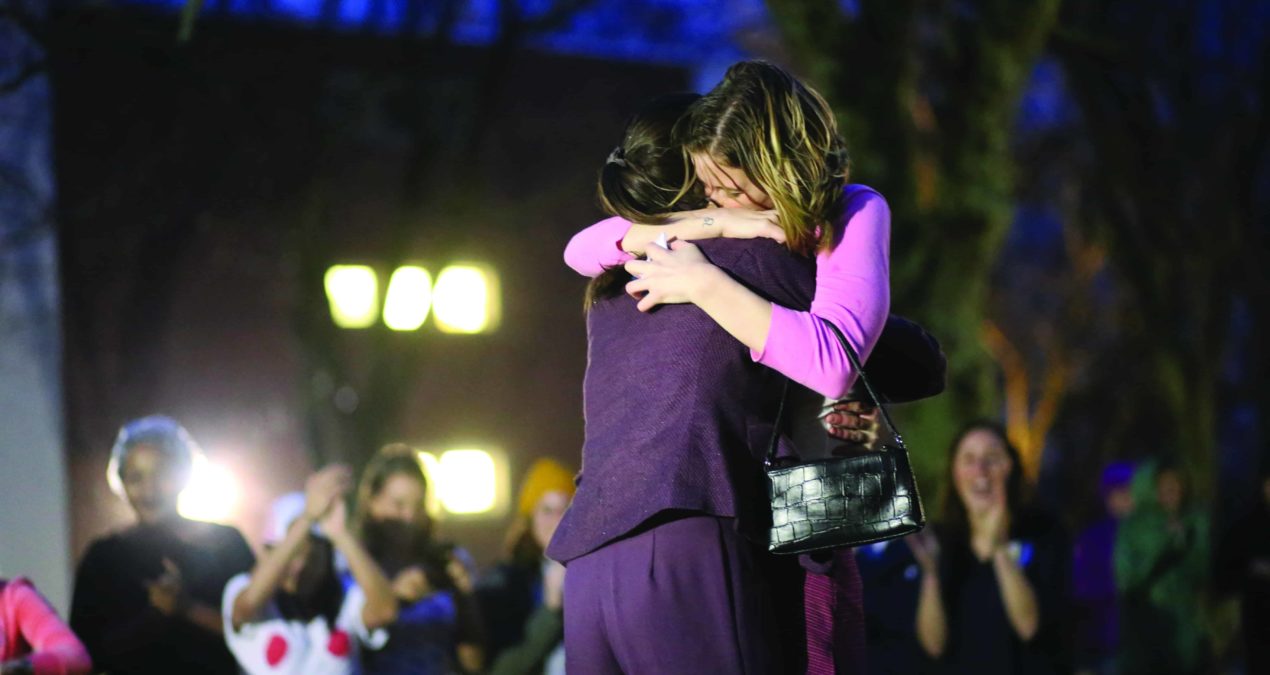 Heavy rain poured from an overcast sky, soaking the lovestruck couple as they kissed in the rain. It was the most cliché yet romantic scene possible, like something straight from a Nicholas Sparks novel.

Except, unlike a Nicholas Sparks novel, where the pair is usually alone when this happens, Ellen McDevitt-Stredney ‘15 and Cheyanne Cierpial ‘16 were surrounded by a crowd of close friends, and they were dressed up as Janice Ian and Regina George from Mean Girls. Students gather on East Quad to witness the couple’s inspiring and romantic serenade.

Cierpial, a sister of Delta Gamma, was pinning McDevitt-Stredney, her girlfriend. In the Greek community, offering your pin to a significant other is the ultimate sign of commitment and devotion. Cierpial is actively involved in Denison’s Greek community, but McDevitt-Stredney’s knowledge of FSL was limited to her own observations and stories that she had heard from Greek friends.

In Cierpial and McDevitt-Stredney’s case, this pinning was also a momentous step in their unique journey with Denison’s fraternity and sorority life. Their pinning showed their love for each other in a way that also highlighted the compassion and acceptance in Denison’s community.

The couple met in Regina Martin’s Literary Theory class in the fall of 2013. Cierpial is the “little sister” of McDevitt-Stredney’s roommate, Allison Scarlott ‘15, and the two had heard a lot about each other, but had never actually spoken.

Cierpial added, “I was like, ‘great, I have to spend an entire semester sitting next to this girl who probably hates everything about me because I’m this bubbly and annoying girl and she’s cool and mysterious and comes in with her headphones on.’”

“It became pretty clear pretty quickly that, you know when you look at someone and you’re like ‘oh, well we, you get it,’” Cierpial continued. “We’d share these glances and it was so clear that we were thinking the same thing when the whole class was on a different page.”

The two came out to their friends during the 2014 spring semester.

Cierpial said that, “I was more afraid to come out to DG than I was with probably anyone else. I was terrified.” However, her sorority’s positive response made the couple feel comfortable.

“I didn’t know anyone in the Greek community who was in a sorority and had a girlfriend, or identified in that way, and–I might start crying–but Delta Gamma has been not only accepting but encouraging to me,” Cierpial said. “I don’t think I would be at this point without them.”

Cierpial expressed how she feels supported not only by DG, but by the entire Panhellenic community. “I also want to give a shout out to Panhellenic,” said Cierpial. “I know that if anything happened in the Greek community, if I went to Panhel, they would be willing to listen to me, hear me out and help me and make sure that everything was okay.”

This softened McDevitt-Stredney’s view of Greek life. “I can definitely admit, and if anything Cheyanne has really opened my eyes.

Delta Gamma is a really good example of what Greek life really can be because I can definitely say that when I was a freshman and all of my friends were rushing, it wasn’t an ostracizing feeling, but because I chose not to be a part of that, you don’t resent that, but you just don’t know what that is– this is what they represent kind of thing, and it isn’t at all,” she said.

“When Cheyanne and I did come out and talk about it, I got to know a lot of [Delta Gammas] and I was just kind of blown away by who the people are that make up Greek life, and that underneath that, it just completely dissolved the stereotype.”

While Greek life has played a huge role in their story, the two say that Barney Davis and the English department is another major factor in their relationship.

“I love dating another English major,” said Cierpial, an English literature major. “We just know so many of the same professors.

This is probably the stupidest thing but–”

“Our first kiss was in Barney Davis,” McDevitt-Stredney finished.

“It’s so nerdy but I think one of the strongest reasons why we are such a strong couple is really because we’re both English majors,” Cierpal added. “Literary Theory was a life changing class for me. I think it’s one of those things that I’ve been able to carry to every single experience I’ve had at Denison, and I think it’s kind of funny that that’s where I met Ellen. It’s such an overarching thing; both Ellen and Lit Theory have shaped my Denison experience a lot.”

McDevitt-Stredney is an English major with an emphasis in creative writing. “In the writing world you can get stuck in your head sometimes and Cheyanne is someone I can bounce ideas off of,” she says.

Cierpial and McDevitt-Stredney trade love letters and share a passion for Virginia Woolf’s writing. At their pinning ceremony on Friday night, Cierpial mentioned that she cannot wait to combine their book collections.

After the ceremony she added, “I walked out and saw all my sisters there and so many other people there to support us and I just started crying. Then Ellen came out and we read our vows to each other and it was so exciting to tell her how I feel about her in front of everyone. It was easily one of the most special moments at Denison for me.”

Hearts melted in the audience when in her vows Cierpial said, “If I only had this one moment, it would be enough.”

To read the full interview transcript please click the link below:

A study abroad experience in the historic city of Prague