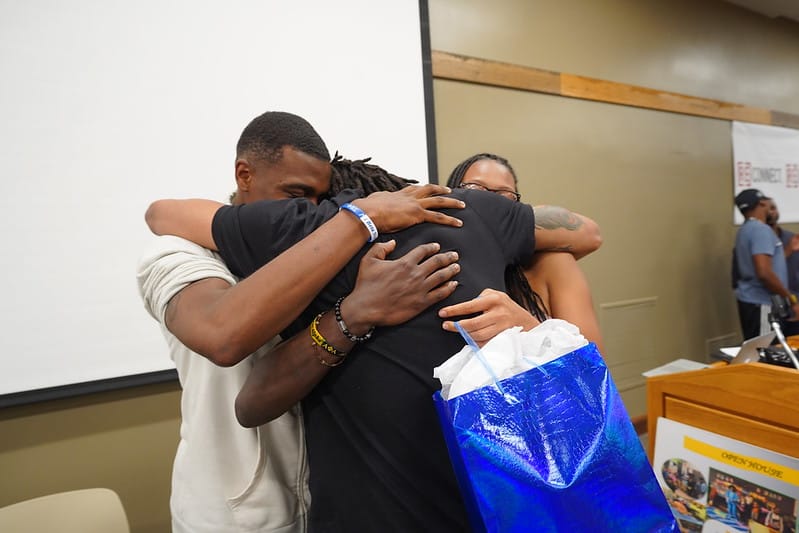 RAY WALKER, Staff Writer — The 50th Anniversary of the Black Student Union (BSU). 50 years of thriving existence and excellence. The Golden Anniversary. The BSU and the Black Alumni Association worked closely to ensure a successful and celebratory weekend.

“Our Essence” served as the theme of the weekend; essence is “the intrinsic nature or indispensable quality of something, especially something abstract, which determines its character” per the Oxford dictionary. The BSU’s essence shows through its sense of community continued distinction and profound interior of character that cannot be wavered or tampered with and we’ve seen this to be true time and time again.

To kick off The Golden Anniversary, on the evening of Friday, September 27, a BSU Family Meeting took place in the Curtis Provost’s Dining Room bringing generations of Black Denison Alumni and students together for the first time in a long time. The meeting began with everyone in the room rising to sing the black national anthem, “Lift Every Voice and Sing” and I could feel the impact of the song in the voices throughout the room. There was then a panel discussion in which increments of two alumni and two current students were brought to the front of the room to answer questions about their experience with the BSU and the Black community as a whole on Denison’s campus.

Following the panel, there was a special time set aside for the founders of the BSU to shed light on the organization’s establishment. Darrell Brown Esq, ‘71, talked about the hardships the founders endured to establish the BSU in 1969; anger was a common emotion throughout the creation of the BSU because blacks were the minority and weren’t allotted many resources, but Brown wanted to make it clear that “Anger is a healthy emotion. Especially when you feel you’ve been wronged. But you must channel that anger into positive energy.” After the founders gave their words of wisdom alumni and students dispersed to the BSU to reminisce about their experiences in the sacred space. Following this gathering, an all-class mixer took place on the third floor of Slayter which gave everyone a chance to socialize and reconnect on a deeper level.

Saturday was filled with events including a general meeting for alumni, an alumni gospel choir concert, a banquet and the National Panhellenic Council’s Icebreaker party, but the focal point of the day was the BSU’s 50th Anniversary Banquet. The current Vice Chief Minister of the BSU, William LaGrone ’20, said that “meeting Denisonians from so many different generations who share so many different experiences but have in common the love for wanting the absolute best for the black community at Denison brought excitement to my body.”

The banquet epitomized a variety of generational experiences that brought together a wave of black power. The evening started with a warm welcome from Lariona Jacobs ’20, the current Chief Minister of the BSU and a welcome from the President of the Black Alumni Association, Eric Norris, ‘05.

When asked, Norris said “[his] biggest takeaway from the weekend was having the ability to speak with those that started the BSU and to reassure them that it was in great hands.”

The moment that one of the founders told me that what they saw in the BSU today was what they dreamt of 50 years ago made me proud to be a black man that graduated from Denison and proud to be the President of the Black Alumni Association. Remarks from President Weinberg proceeded the welcome where he shared some insight about the major impact that the BSU leaves across campus both culturally and emotionally in today’s time.

Resuming with the evening schedule, there were multiple student performances consisting of poetry, rap, and singing that engaged the people’s attention in a variety of interactive ways. Next on the agenda was a history presentation from Candace Koney, M.D. ‘88 and Jaleel Poole, ‘22. They specifically reflected on the life of some special alumni and their life journey. These alumni included Dr. Charles Henry ‘69, Darrell Brown, Esq. ‘71, Sheila P. Little, Ph.D. ‘72, and Judge Richard Dinkins ‘74. Afterward, Dr. Jackson, a professor in the Black Studies Department since 1974 reflected on the development of the Black Studies Department and how it’s come to be the powerful space it is today on Denison’s campus for black students and students of color.

The keynote speaker, Rev. Dr. Gary Simpson ‘84, placed an undeniably profound message in the hearts and souls of everyone in that room. He provided strong affirmation that black is indeed beautiful. No matter what shade of black you are or where your blackness derives from, blackness represents beauty and excellence all across the world.

Following that, a tribute video was played to honor Dr. Henry J. Durand, the first Chief Minister of the BSU, which highlighted his love for education and belief in every student’s ability to learn no matter what challenges they faced. Dr. Durand was a true advocate for changing lives when it came to positively influencing students who were the minority in education systems. Dr. Bonita Durand, without reservation, came to the stand following the tribute video to speak on behalf of her deceased husband. She expressed how she wished Dr. Durand could be present, but she knew he was looking down smiling on everyone and everything that was taking place as we celebrated 50 years of the BSU’s essence.

This grandiose weekend was everything and more the black community hoped for. The BSU and the Black Alumni Association worked tirelessly, intentionally, and fiercely to make the BSU’s 50th Anniversary a sensation and that is was. Black existence, excellence, exuberance, and essence ensured a successful weekend and a powerful Golden Anniversary.

For more photos from The BSU’s 50th Anniversary and Big Red Weekend, check out the Denison Flickr album here.