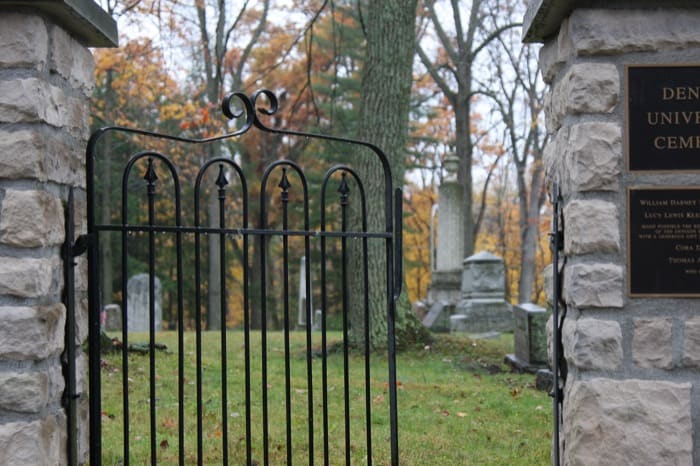 The legacy of Denison’s cemetery and its famous alumnus

“The scenes of happy college days, the home we love so well”

ZACH CORREIA, News Editor — For some, their love for Denison makes it their home forever. At the top of Sunset Hill, flanked by Smith Hall and Sunset House sits the College Cemetery. Established in 1833, the cemetery used to be located on the original college homestead approximately a quarter of a mile southwest of the Kendal retirement community. When the college moved up the hill in 1854, the cemetery came along — resulting in the grimacing act of unburying and then reburying the already interred.

Among the rows of graves are some of the Denison’s most prominent denizens. From university presidents to Civil War veterans and an archivist to a zoologist, the College cemetery is an eclectic remembrance to those of Denison’s past. Two of the most prominent obelisks on the grounds are John Pratt (1831-1837) and Samson Talbot (1863-1873) and his wife, Mary, Denison first and fifth president respectively. Pratt helped establish the school that would become Denison, seeing it through an early tragic fire in May of 1832 that burned down most of the physical plant of the college. Talbot guided the university through the latter half of the civil war and lead the effort in the establishment of Denison’s permanent endowment. Other presidents buried include Jeremiah Hall (1853-1863), Elisha Andrews (1875-1879), Clark Chamberlain (1913-1925), Avery Shaw (1927-1940), and Blair Knapp (1951-1968).

Beyond the president, no others have given more to Denison than professors. Longtime professors of English Dominick Consolo who was beloved by his students and would jump on desks to inspire them, according to his Memoriam in the spring 2016 Denison Magazine. One of those inspired was Michael Eisner who made Consolo the basis for Robin Williams’ character, John Keating, in Dead Poet’s Society. Mathematics professor and alumni Chosaburo Kato near the east side of the cemetery. During the Second World War, he taught math to Flight D2 unit of the Navy 12 program. One of the privates in the unit, who Kato also gave private Japanese lessons to, was future Supreme Court Chief Justice William Rehnquist. Two historians grace the cemetery as well: Professor of History, alumni and Granville historian William Utter and Professor of History, Denison historian whose work was used in writing this article, Wally Chessman.

To be buried in the college cemetery a person has to be a senior official, or a member of the faculty for over 20 years along with their spouses and children if they are unmarried per university policies. For most of those buried a resolution from the Board of Trustees was required for them to get a plot. For all of those buried and some not buried, Denison is the home they know so well.