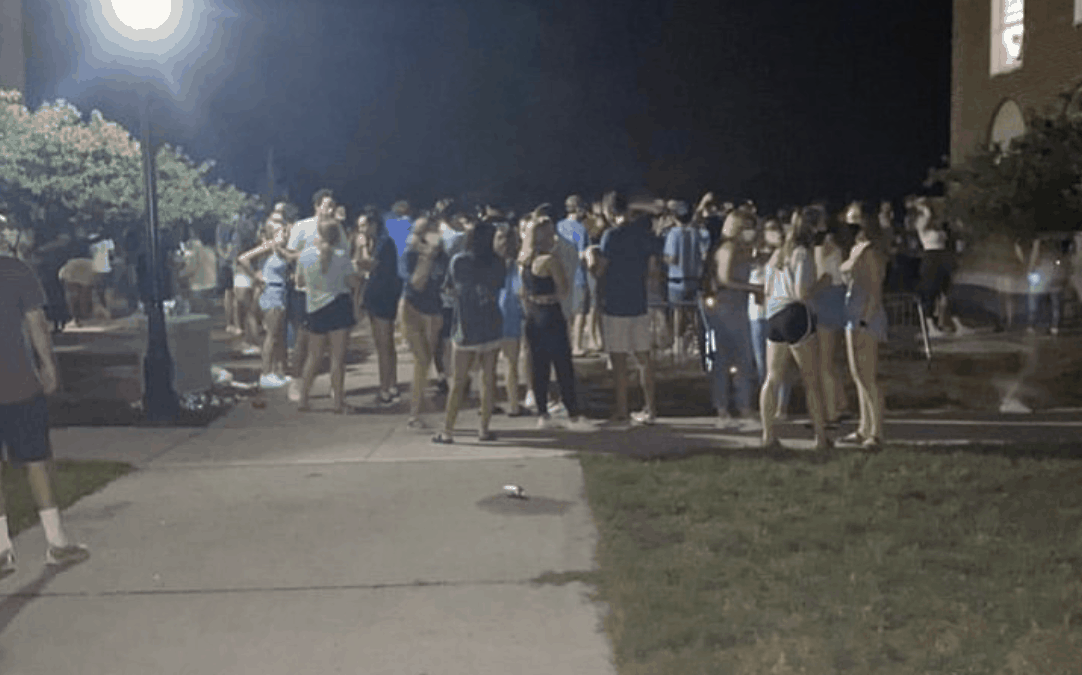 LIZ ANASTASIADIS, AMANDA TRAUTMANN, & ISABELLA PONADER, Editor-in-Chief and Specials to The Denisonian — The first COVID-19 cases on Denison’s campus have been confirmed.

After the first results of signal testing, on Thursday, August 20, less than a week after classes began, University President Adam Weinberg communicated with the campus that “less than five cases” of the virus have been confirmed. At the beginning of the semester, Denison was anticipating around 1,900 students on campus and another 400 studying remotely.

In the plea, Weinberg wrote: “Most of the problems over the weekend were with larger gatherings. We are asking that you keep gatherings outside and to groups of ten or fewer for the time being…Remember, the goal is to keep a distance from one another so we can mitigate spread should someone in the community be infected with COVID.”

The night before the email, students gathered on East Quad at Beaver Beach, a popular outdoor party space even before COVID-19. For several nights now, it has become an epicenter for non-socially-distant parties.

Students were seen at Beaver Beach blasting music and standing less than six feet apart, some with masks and some without. Most students were also holding a beer or other alcoholic beverages.

Community Advisors (CA’s), otherwise known as Residential Advisors on other campuses, were trying to break up the big groups. Rayshon Walker ’22, a communication and anthropology/sociology double major from Columbus, OH and the CA for Shepardson Hall second floor, talked with The Denisonian about the party on Beaver Beach on the night of Saturday, August 8.

“I wasn’t on-call but as CAs in the same cluster, we had to rally together that night because things were getting out of control. There were way too many people, not socially distant, in a packed tight area,” said Walker. “The number of people who I had to tell to put on a mask was ridiculous. Some of my other colleagues told people to put on a mask and they were not compliant. It was frustrating when I would ask someone they would say ‘what about my drink?’ It was really an unsafe environment.”

As campus security stood to the side, CA’s were actively encouraging students to wear their masks correctly and practice social distancing. Walker voiced that CA’s felt like they were doing more work than Campus Safety was to control the situation.

When Campus Safety was dispatched to the scene, they were walking around telling students to distance themselves from one another but they weren’t really enforcing protocol, according to Walker. At one point an officer walked through the crowd to break up the clusters of people but that was the extent of what they did. The behavior of the partying students directly undermined the agreement students signed before returning to campus. The Community Care Agreement states, “[Students] will follow protocols for group gatherings both indoors and outdoors and will neither host nor participate in any gathering that exceeds capacity guidelines or violates healthy behavior mandates.”

Walker told The Denisonian that the situation got to the point where campus Administrators Dr. Miller, Julie Tucker and Dean Farley came to break up the party. This is when students finally started to disperse.

When Campus Safety was contacted for comment, Director of Campus Safety, Chief Jim O’Neill, was not available at the time. Instead, Officer Brent Smith offered a brief comment on behalf of Campus Safety. Smith stated that they are following the directions that President Weinberg, the health department, and other University guidelines have instructed, on how to handle situations as they come forward.

When asked about the photo depicting officers standing directly next to and posing with a student, Smith directed us to talk to Chief O’Neill. The Denisonian will be contacting him directly for comment.

The Denisonian will follow up with updates on COVID-19 for the campus community as they are informed. If you would like to submit a tip to us, email [email protected].

EDITORS NOTE: A photo was removed because it didn’t meet our standards for publication.

ON THE HILL: APRIL HIGHLIGHTS