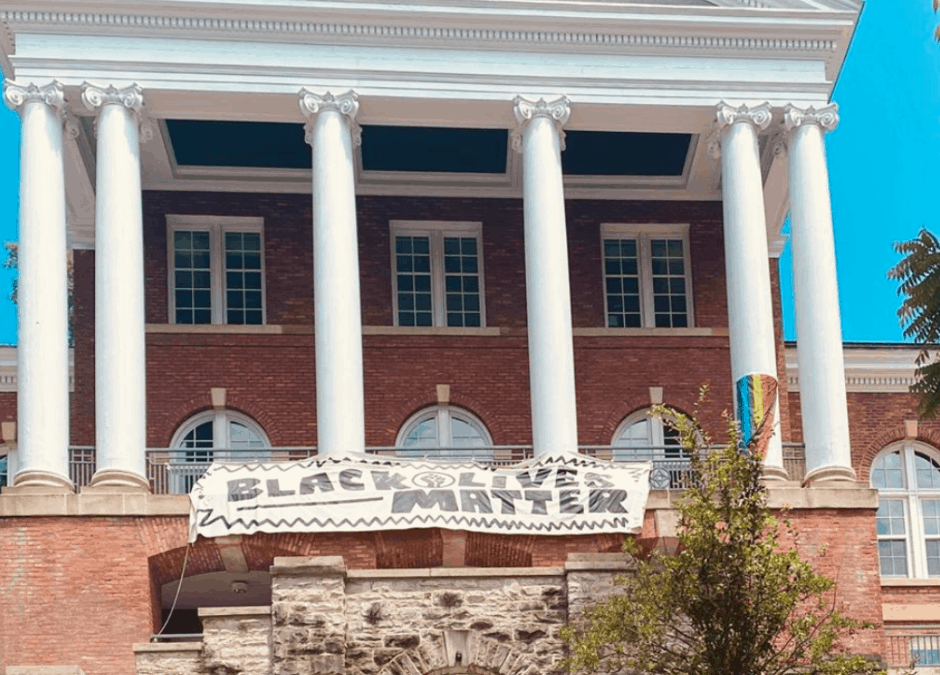 RAMSEY BRISTOL, Staff Writer — In June of this year, in response to the Black Lives Matter (BLM) protests breaking throughout the country, the Denison Studio Art Department created and subsequently displayed a Black Lives Matter banner.

It was hung on the pillars of the upper balcony at the Bryant Arts Center in Granville and remained on display until in-person classes started in mid-August when it was marked for removal by Denison’s Facilities Services.

According to Professor Sheilah ReStack, Chair of the Studio Art Department, “The banner was a Studio Art faculty response to the events of this Spring and Summer and feeling the need to articulate our solidarity with Black Lives Matter and more specifically to show our students of color that they are supported, and matter. We agreed together to do it, along with a message that we sent out to former and current students indicating our wish to become a more explicitly anti-racist environment.”

The Studio Art Department released the following statement: “To our Black students, faculty, staff and community members, we see you, we hear you and we are thinking of you and your families. Denison Studio Art works to create a learning environment that shows, supports and celebrates diverse experience, artwork and expression. Denison Studio Art plans to meet with Studio Art students in the beginning of the new semester, craft an anti racism action plan and collectively examine how we can strengthen our program & classes. This will be done in collaboration with students, and will be incorporated into how we, as faculty, engage, make space and support our BIPOC students. We know we can do better, and we want to do the work together. We promise to work with the understanding that no singular attempt can undo systemic racism, make up for lost life and undo generational trauma. As we work together as a program it is imperative we maintain the value of our goals and the humility to understand that many efforts will fall short, but we will continue to uphold these anti-racist values and be persistent in seeking racial justice. In the meantime, we are reaching out to you, our students and alumni. If you have ideas in which Denison Studio Art can offer individual or collective support, please let us know. We want to hear from you.”

However, before the semester commenced and the student body was permitted to return to on campus living and instruction, the banner was removed per request from administration due to its violation of Denison’s policy on hanging banners/signage from campus buildings. Professor ReStack said, “I cannot speak to the reasons for the banner coming down, you will need to contact the senior administration to find out the rationale. It was not our decision.”

Kim Coplin, Provost and Associate Professor, commented that “As a general rule and practice, we don’t allow banners on the outside of buildings. The one exception is to announce an event. A banner may be placed for a brief period of time before the event takes place. There are places around campus where students, faculty and staff can hang banners, posters, chalk and express views, but we do ask that people not hang banners on the outside of buildings.”

To clarify, Dr. Coplin stated that signage is allowed on buildings, but only with the permission of administration and only if the signage is promoting Denison affiliated events.

In justifying the policy, Alexandra Schimmer, Denison’s General Counsel and member of Senior Staff, offered examples of other universities with similar policies, such as the University of Michigan and John Carroll University.

Schimmer also noted that the administration attempted to work with the Studio Art department by giving them the okay to display the BLM banner in the Bryant Arts Center.

Amidst discourse with administration, three arguments seemed to prevail regarding the rationale behind having the BLM banner removed.

One, that the hanging of signage from academic buildings is a safety and liability concern. Second, that opening up the door and allowing exemptions to Denison’s policy to allow the BLM banner would also mean opening the floodgates for more henous signage, such as white power symbols or swatikas. Third, that tax exempt bonds which fund much of Denison’s capital projects, like academic buildings, stipulate that such buildings are to be used for the mission of the organization being funded, which in this case is the university specifically.

When contacted by The Denisonian, administration proposed how to frame the issue. As suggested by Dr. Coplin, “Rather than think about this as “two sides,” can I suggest a different framing? There are really two different questions. What are the college’s policies about free speech? And what is the college doing to support diversity and antiracism work?”

The decision to remove the banner came amidst a verbal commitment by administration to promote antiracism. In an email on June 1, president Adam Weinberg said “I want to publicly stand with our African-American students, faculty, staff, alumni and others. In the loudest possible voice, I want to condemn the deaths of George Floyd, Ahmaud Arbery, Breonna Taylor and the many others and I want to state openly that Denison is a college that is committed to ridding society of structural racism.”