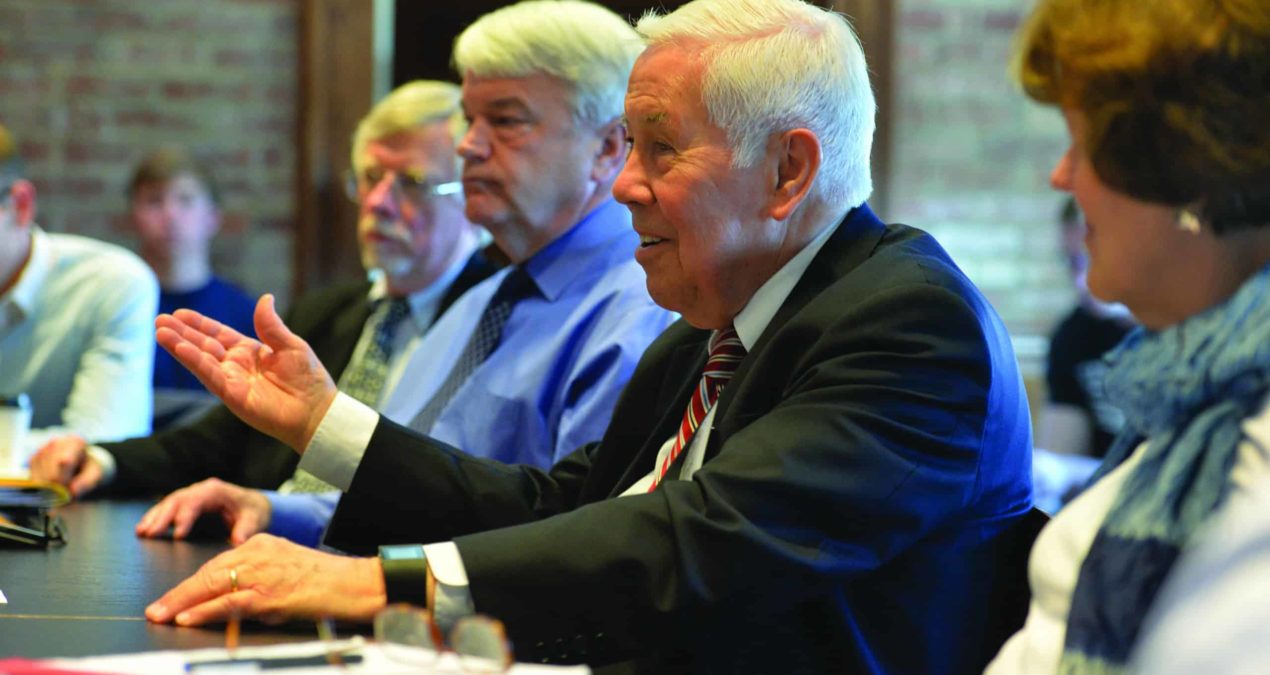 After Richard Lugar ‘54 graduated Denison University, he attended Pembroke College as a Rhodes Scholar, served for the United States Navy for four years, and then pursued a career in public life. After 36 years of representing Indiana in the U.S. Senate, Sen. Lugar is not done advocating for a more productive government in Washington. It is fair to say that Sen. Lugar is among Denison University’s most accomplished alumnus.

The Denison Alum is currently the President of the Lugar Center, which focuses on global food security, aid effectiveness and bipartisan governance.  On his most recent visit to Denison, Lugar spoke at the Inaugural Richard G. Lugar Symposium in Public Policy. In his opening address he discussed the current election cycle and the dangers of rampant partisanship as a motivator in the political field. The senator warned of the dangers of overt partisanship and anger entering the presidential debate.

“Anger disconnected from a realistic reform agenda and lacking in respect for pluralistic views is not a political virtue. It is possible for anger to be real and heartfelt, but simultaneously misguided and destructive,” Lugar said.

Beyond the current election, The Lugar Center has been very vocal in trying to break down overly partisan rhetoric and increase cooperation from across the isles.

“We’ve graphed the situation very vividly.” Lugar said. The Lugar Center has partnered with the Georgetown University McCourt School to develop a bi-partisan index. They have rated each and every member of the House and the Senate on the basis of their ability to gain co-sponsors for legislation. Senator Lugar believes that this is the key for producing successful legislation in congress.

“Things have been going downhill very rapidly in the last three congresses,” Lugar said. “In terms of production of legislation, the civility that is required for co-sponsorship and meeting of minds, there has been a drastic reduction.”

According to Lugar, this is especially problematic, as fewer and fewer attempts to reach across party lines to get things done have led to discouragement among current legislators.

Lugar has been a lifelong advocate of civil debate, and the productive discussion of ideas. The senator began his path of civil cooperation at Denison.

“Denison prepared me to be a student leader, to listen to people, to accomplish things by organizing.” Lugar said.

During his time at Denison, Lugar served as co-president of the DCGA with Charlene Smeltzer, who, later turned out to be his wife of 60 years. Lugar also wrote a column for the Denisonian every week for four years.

Writing a column, Lugar said, was both delightful and challenging. “I liked it because I had the opportunity to be read by all my other classmates, so they could discuss or argue with me. The academic side is very important. But your ability to express yourself in writing and in speaking skills are really critical to far-ranging success because these are the persuasive skills that lead people to take action.”

Lugar utilized those skills at Pembroke College at Oxford University where he served as Chairman of the American Students at Oxford, and was responsible for greeting President Truman when he visited the college from overseas.

Senator Richard Lugar has certainty been a champion of cooperation during his service to the American public—he encourages students following a similar path of public service to engage in debate, to write for publications, and share their ideas with one another.