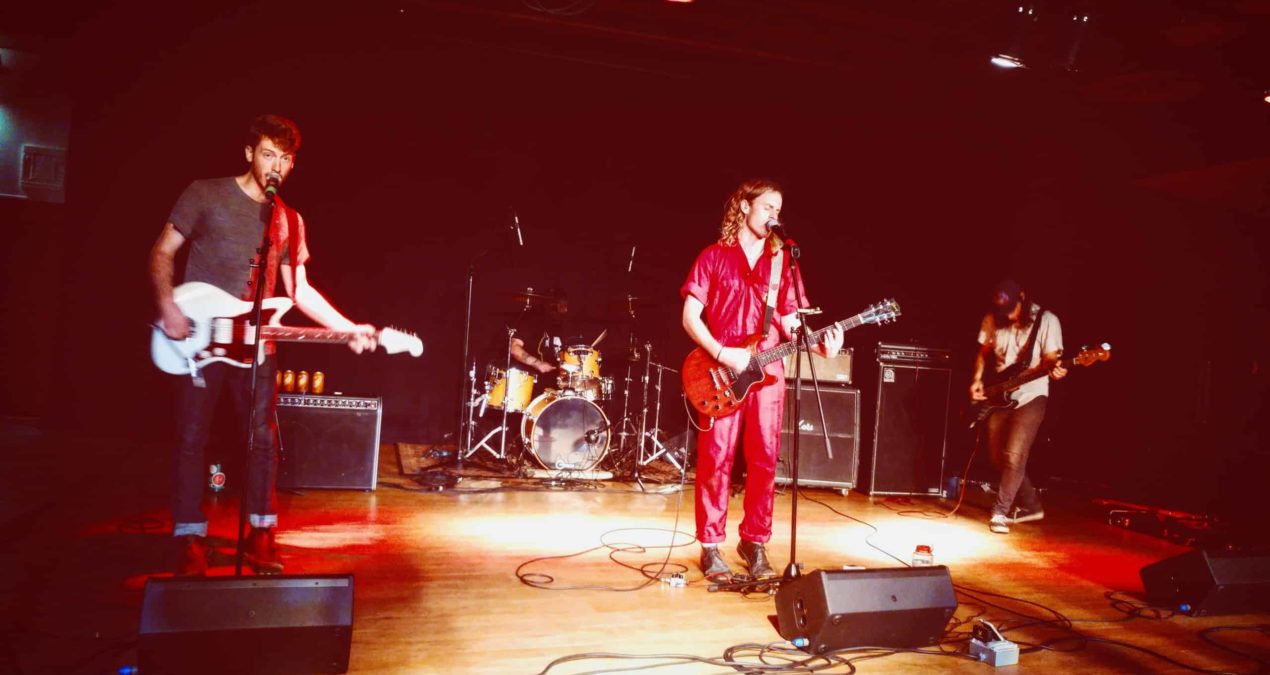 Columbus hard rocking emo-influenced band, The Sidekicks, played at the Nest for a UPC/CLIC sponsored concert. The Sidekicks had infectious energy that got the small crowd jumping around the Nest.

The Sidekicks stuck to their style in a set that focused on playing to a loud and soft dynamic that is rather classic of the emo-inspired, hard indie rock. Similarities to bands such as Citizen and Joyce Manor were evident with the heavy metal levels of distortion on the dueling guitars from lead singer, Steve Ciolek, and lead guitarist, Matt Scheuermann.

The crunching guitars were able to give the music forward motion, which lead to some head banging and air guitar from the crowd. The drums from Matt Climer gave a great-added punch to the swirling guitars.

The amount of shredding could be viewed as amateurish for many bands, but not for The Sidekicks. After extensive touring throughout the United States with bands such as Pinegrove and Into It Over It, The Sidekicks are road vetted.

However, Steve did make the comment despite being from Columbus, Granville was like driving to a different state. The quaintness of Granville can be a bit of a shock for some bands used to playing crowded dive bars in the city, but The Sidekicks adjusted and performed with their high-energy style.

The Sidekicks played many of their songs off their critically acclaimed 2015 album, Runners in a Nerved World, such as “The Kid Who Broke His Wrist” and the cleverly titled “Jesus Christ Supermalls”.  The Sidekicks have the ability as a band to play their songs for the first time to a crowd and get everyone singing along to their music. The swooning vocals from Steve and Matt were able to go into a rousing chorus with each of their songs.

In addition, Steve Ciolek was rolling on the floor in mid-guitar solo for the small crowd, who absolutely loved it. The gasps from the crowd indicated that many of the people were surprised that Steve was giving it all for the tiny crowd of Denisonians. Closing out their show, the band had a short-rendition of Black Sabbath’s famous song “War Pigs”, which hyped up the crowd to the very end. Unfortunately, it was a short-rendition leaving some fans wanting more of The Sidekicks styled “War Pigs”.

After playing, The Sidekicks were conversationalists with the enthusiastic Denisonians. After briefly talking with the band it looks like they will be keeping it a bit more local as they write their upcoming album for 2017.

If you get the chance, it is highly recommended to check out their tour schedule, merch store, and music on the bandcamp page, www.sidekicksohio.bandcamp. It can only be expected that The Sidekicks will continue their hard rocking music for many years to come.