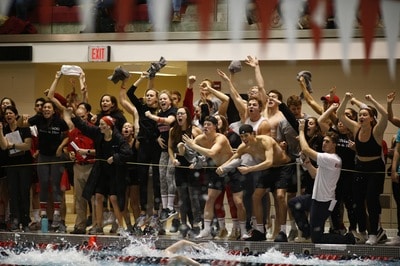 JOANNE LEE & JAEEUN LEE — Despite tough competition from their competitors, The Big Red Men’s Swimming and Diving team retained their title as champions as they won their 11th championship in a row and 12th overall in their history.

The 2019 North Coast Athletic Conference Swimming & Diving Championship was held in the Trumbull Aquatics Center here at Denison for the sixth year in a row, and it was a tight race with the men narrowly defeating Kenyon, earning 1851.0 points.

Head coach Gregg Parini describes what the meet meant to the teams, “Both women and men performed at a very high level throughout the 3+ days of competition,” Parini said.

We met a number of our team goals, were highly competitive, and improved our national roster heading into NCAAs next month.”

This year, the underclassmen particularly had a chance to shine.

Francis Biagioli ‘20 talked about the layout of the men’s team this year, as the top swimmers were not part of the scoring team, giving the freshman a chance to shine.

“Kenyon actually had a stronger lineup than they did in the years past so this was the perfect storm to really challenge the freshman and they stepped up to the challenge. They were willing to compete and overall produced some of the strongest swims this season with everyone performing at an extremely high level,” Biagioli said.

Bebe Wang ‘20 provided some more insight as well explaining that, “to prepare for Nationals, the top six swimmers who were invited to NCAA did not score during NCAC championships so it was tough to win the championship since our top 6 swimmers did not compete, while Kenyon included all of their top swimmers,” Wang said.

Wang was part of the top six and continued to train himself and stay focused on the NCAAs during the days leading up.

Carson Clear ‘19 who was part of the winning 200 medley relay and 400 free relay team spoke to the high levels of willingness and competitiveness that the team had going into the meet.

“My mindset going into the meet is to swim fast and have fun. My biggest fear is going into the meet complacent and rankings are always taken with a grain of salt, since you never know how everything will pan out. Everyone supports each other and there is always a healthy level of competition,” Clear said.

As for the energy and atmosphere of the championships, Biagioli ‘20 remarks on the unforgettable experience where “everyone is on the same side of the pool supporting you and cheering for you where parents and past alumni will all come together to support you.”

This was especially evident during the final 400 Freestyle Relay where both the men and women narrowly locked in the win for the Big Red. Although Wang ‘20 did not swim, he commented that “cheering for my teammates and seeing their hard work pay off was extremely rewarding.”

The 2019 NCAA Division III Championships will be held on March 20-23 in Greensboro, N.C. where 18 of the team’s top swimmers will represent Denison.

Biagioli ‘20 and Clear ‘19 reflected on their year and what lies ahead: “Every morning, we wake up with a purpose to always improve ourselves and help our teammates improve,” Biagioli said.

None of this would be possible without the support from everyone around us from including our friends, families, alumni, and most importantly, the Denison community. It really means a lot to us. Thank you for everyone’s support,” Clear added.